A black man’s quixotic quest to quell the racism of the KKK, one robe at a time 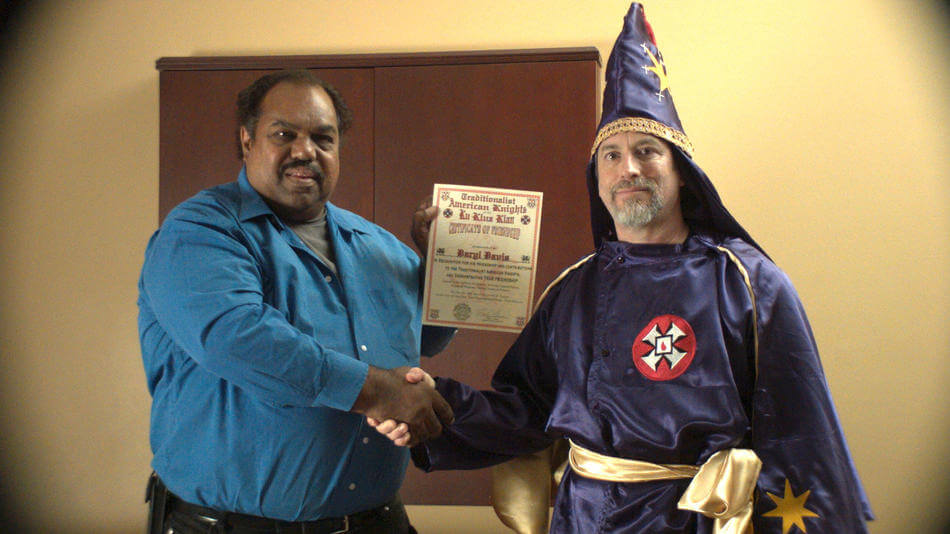 “Who’s this black guy trying to make friends with the Ku Klux Klan?”

A raised eyebrow, a shake of the head.

Such were the sentiments of Scott Shepherd, a former Klan grand dragon, when he first saw Daryl Davis, a piano-playing bluesman who travels the nation attempting to dispel racism from those who hate him most. It doesn’t often work, but over the decades Davis, like a man on a quixotic pilgrimage, has collected more than two dozen Klan robes from those who have disavowed white supremacy.

His unlikely story unfolds in “Accidental Courtesy,” a documentary by Matt Ornstein that follows Davis on an odd and lively quest to Confederate monuments, Klansmen houses, boogie joints, churches and a hot dog stand where Davis informs Jeff Schoep, the commander of the National Socialist Movement, that Elvis got his inspiration and rhythm from Chuck Berry, and that slaves did not arrive on these shores voluntarily.

“How can you hate me when you don’t even know me?” Davis asks in the film, which opens in Los Angeles on Friday.  “Throughout my life I have been looking for an answer to that.”
Musician seeks out bigots in documentary ‘Accidental Courtesy’

His disarming simplicity collides with a country in the midst of racial unease marked by police shootings of black men and the nationalist populism and identity politics that propelled Donald Trump to the White House. These are the most divisive times in more than a generation, and Davis’ creed, genuine as it appears, seems to his detractors as naïve and surreal against rising hate crimes, deepening culture wars and calls by supremacists to found a white nation-state.

“If you had told me when we began this project that in 2016 white supremacists would be not only broadcasting from a presidential candidate’s rallies, but that he would be unwilling to promptly denounce their support, I would not have believed you,” said Ornstein.

Davis is criticized by some African American activists, including Kwame Rose, who in the film sits for drinks with Davis in Baltimore: “Infiltrating the Klan ain’t freeing your people,” says Rose, who protested the death in police custody last year of Freddie Gray. “You’re uneducated about the reality of most of the people who look like you…. Stop wasting your time going to people’s houses who don’t love you, a house where they want to throw you under the basement. White supremacists can’t change.”

Davis, 58, is undeterred.  A big man with a deep-rolling voice and hair graying at the edges, Davis recounts American history and how jazz and blues rose from the black South to influence rock ‘n’ roll and country music. The film portrays Davis, who has performed with Little Richard and Jerry Lee Lewis, as an unabashed troubadour with nimble fingers and a curious message.  The son of a foreign service officer, Davis spent part of his childhood overseas, far from the racism many African Americans learn early.

His first encounter with bigotry came when he was a 10-year-old Cub Scout. Bottles and rocks were thrown at him as he marched in a parade in Belmont, Mass. The bewildering incident was the seed of a mission that years later found him joining an all-white country band, attending Klan rallies, accepting a “certificate of friendship” from the Traditionalist American Knights of the KKK and starting a conversation with Klan Imperial Wizard Roger Kelly. The two became close and Kelly asked Davis to be his daughter’s godfather.

When Kelly quit the Klan, he gave Davis his robe; Davis hopes one day to put it in a “Museum of the Klan.” The surrender of a garment that is as iconic as a burning cross was a peculiar act in a country with a legacy of slavery, Jim Crow, school segregation, whites-only water fountains and other prejudices that reverberate today.

“It’s not history repeating itself, it’s history that has not gone away. I deal with Klansmen and white supremacists all the time,” Davis said in an interview, noting that racism became more overt in President Obama’s second term. “I did not vote for Donald Trump and I do not support him but I believe that Trump is the best thing to happen to this country in a long time. He’s bringing out the country’s ugliness. There’s no turning a blind eye anymore.”

He added: “We’ve simply been putting Band-Aids on the wounds of racism. We haven’t drilled down to the bone to get to its source.”

One of Davis’ strengths is his persistence to engage men like Shepherd, the son of an alcoholic father who joined the Klan when he was 17 in search of acceptance. He became a Klan leader in Tennessee but left the organization after deeming it too militant in the 1990s. In 2008, Shepherd had part of his stomach removed. “I had ulcers probably from all the guilt and secrets held inside,” he said. “I wanted to be the person I was before the Klan.” He came across a TV program about Davis and contacted him three years ago.

“I looked him up and he took me in like a brother,” said Shepherd, who traveled recently with Davis to the Lincoln Memorial in Washington. “He’s really got something. You can take a positive action against a negative action and come out well. It’s one step at a time with Daryl. I think he can convert people.”

The challenge can be exasperating, impossible and sometimes comical. J.C. Faulk, a community organizer for Black Lives Matter in Baltimore, called Davis “reprehensible” and told him “get the . . .out of my face.” In an exchange that could fit into a Quentin Tarantino movie, a white supremacist once told Davis that “black people have a gene that makes them violent.”

Davis waited a bit and asked the man to name three black serial killers. The man thought for a while but could name none. Davis rattled off a half-dozen white serial killers. To extrapolate on the man’s logic, Davis told him that white people have a serial killer gene. “Well, that just sounds stupid,” said the man. Davis smiled, making his point.

Talking to Klansmen “has worked for me and I’ve proven it,” said Davis. “I appeal to people’s common sense. I don’t seek to convert them but if they spend time with me, they can’t hate me. [The Klansman] sees that I want the same thing for my family as he does for his. . .If you can work on the things in common, that’s how you build friendship.”