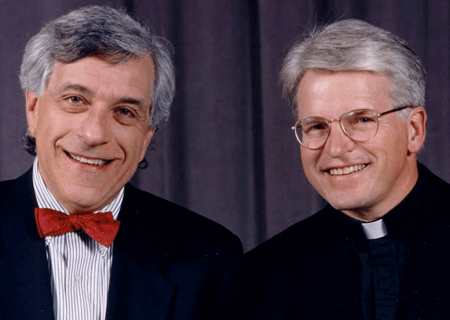 Monsignor Hartman and Rabbi Gellman are the first clergymen to be hired by a national network since Bishop Fulton J. Sheen in the late 50′s. Their work as religion consultants for both the weekday and weekend editions of Good Morning America, their regular appearances on the Imus in the Morning radio program, their animated children’s…

Monsignor Hartman and Rabbi Gellman are the first clergymen to be hired by a national network since Bishop Fulton J. Sheen in the late 50′s. Their work as religion consultants for both the weekday and weekend editions of Good Morning America, their regular appearances on the Imus in the Morning radio program, their animated children’s special for HBO, and their cable television program, The God Squad, have made them two of America’s best known and best loved clergymen.

Their many lectures around the country draw huge crowds due to their deep friendship, their absolutely unique blend of humor and pathos, and their simple message that at this stage of our cultural and religious history, we know enough about how we are different and not enough about how we are the same. The authenticity and power of this message of interfaith harmony comes in great measure from the fact that they are not media figures, but working clergymen.

Monsignor Hartman runs the diocesan television station, Telicare, for the diocese of Rockville Centre on Long Island, New York, and also celebrates mass at Holy Trinity High School and St. Vincent de Paul Church in Elmont, New York. Rabbi Gellman is the senior rabbi of a large synagogue, Temple Beth Torah in Melville, New York and was president of the New York Board of Rabbis.

Morrow Junior Books published Lost and Found, their new book for children about dealing with loss, in the spring of 1999.

Monsignor Hartman and Rabbi Gellman are the recipients of many awards and honors including the Christopher Award for their book, Where Does God Live? and for their animiated HBO Special How Do You Spell God? they won the prestigious George Foster Peabody Award, as well as the Emmy Award for Best Children’s program of 1997.

Rabbi Gellman is married to Betty Schulson and has two children, Mara and Max. Monsignor Hartman is not.

How Do You Spell God?

The Search for Meaning

Interfaith Harmony in a Civil Society