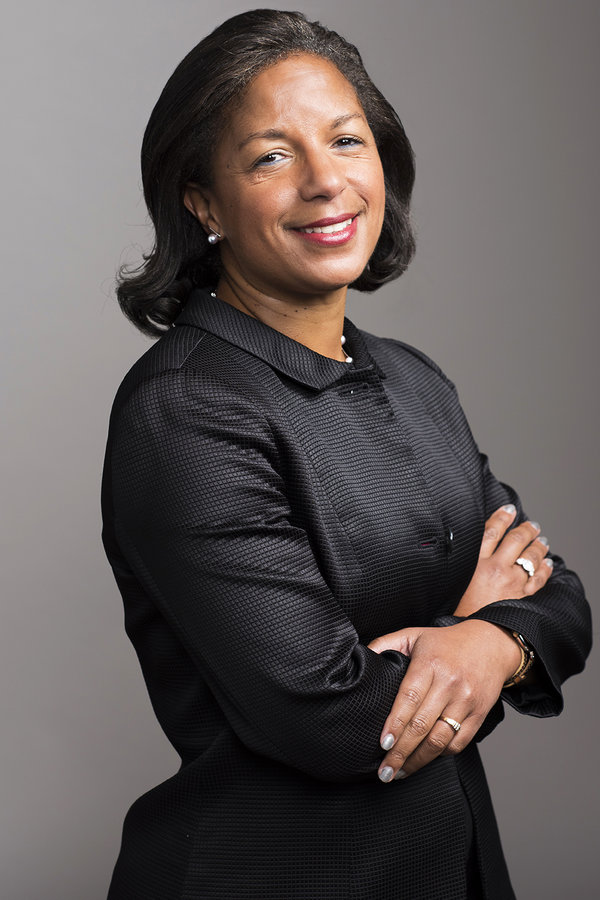 From January 2009 until assuming the role of National Security Advisor in July 2013, Ambassador Rice served as U.S. Permanent Representative to the United Nations. At the UN, she worked to advance U.S. interests, defend universal values, strengthen the world’s common security and prosperity, and promote respect for human rights. Under Ambassador Rice’s leadership, the U.S. Mission to the United Nations helped win the stiffest UN sanctions ever against Iran and North Korea, unprecedented action to prevent the proliferation of nuclear weapons and materials, support for life-saving interventions in Libya and Cote d’Ivoire, cooperation on the referendum for independence in Southern Sudan, vital UN assistance in Afghanistan and Iraq, stalwart support for Israel’s security and legitimacy, and progress on reform of the flawed UN Human Rights Council. In a world of 21st-century threats that pay no heed to borders, rebuilding a strong basis for international cooperation has helped the United States tackle its foreign policy priorities and make the American people safer.

Prior to serving as U.S. Permanent Representative to the UN, Ambassador Rice served as Senior Advisor for National Security Affairs on the Obama for America Campaign and later on the Advisory Board of the Obama-Biden Transition and as co-chair of its policy working group on National Security. From 2002-2009, she was a Senior Fellow at the Brookings Institution, where she focused on U.S. foreign policy, transnational security threats, weak states, global poverty and development.

From 1997 to 2001, Ambassador Rice was the U.S. Assistant Secretary of State for African Affairs. In this position, she formulated and implemented U.S. policy for 48 countries in Sub-Saharan Africa and oversaw the management of 43 U.S. Embassies and more than 5,000 U.S. and Foreign Service national employees. In 2000, Ambassador Rice was co-recipient of the White House’s 2000 Samuel Nelson Drew Memorial Award for distinguished contributions to the formation of peaceful, cooperative relationships between states. From 1995-1997, Ambassador Rice served as Special Assistant to President William J. Clinton and Senior Director for African Affairs at the National Security Council at the White House. From 1993-1995, she served as the Director for International Organizations and Peacekeeping on the National Security Council staff. Previously, Ambassador Rice was a management consultant with McKinsey and Company in Toronto, Canada, and served on numerous boards, including the Bureau of National Affairs (BNA), National Democratic Institute and the U.S. Fund for UNICEF.

Ambassador Rice received her M.Phil (Master’s degree) and D.Phil. (Ph.D) in International Relations from New College, Oxford University, England, where she was a Rhodes Scholar. She was awarded the Chatham House-British International Studies Association Prize for the most distinguished doctoral dissertation in the United Kingdom in the field of International Relations. Ambassador Rice received her B.A. in History with honors from Stanford University, where she was named junior Phi Beta Kappa and was a Truman Scholar. She graduated as valedictorian from the National Cathedral School for Girls in 1982, where was president of the student body and she played varsity tennis and basketball. Ambassador Rice is a native of Washington, DC, married to Ian Cameron, and the proud mother of two teenage children.

In 2017, French President Francois Hollande presented Ambassador Rice with the award of Commander, the Legion of Honor of France, for her contributions to Franco-American relations.

National Security & Foreign Policy
Ambassador Rice has served two Presidents in senior positions in National Security policy-making over the span of almost 25 years. She has deep knowledge of all aspects of National Security decision-making, the role of the President and the NSC, as well as military, defense and intelligence policy. She offers unique insights and extensive experience in formulating and implementing U.S. policy related to: China; the Asia-Pacific; Europe, NATO and the EU; Russia; the Arab world and the Middle East; South Asia; Africa; Latin America and Canada; the global terrorist threat, including efforts to defeat ISIL, Al Qaeda and their affiliates; Homeland Security; refugee policy; climate change; global development; global health security and pandemic threats; and non-proliferation.

U.S. Leadership in the World
As America’s representative to the world at the UN, Ambassador Ambassador Rice has unparalleled experience in complex diplomacy, high stakes negotiations, public affairs, and shaping international outcomes to serve U.S. interests. Through such work as negotiating tough sanctions against Iran and North Korea and winning international support for U.S. values of freedom, equality and tolerance, Ambassador Rice has collaborated with and confronted Russia and China, while working closely with America’s key partners the UK, France, Germany, Italy, Canada and other allies like Japan, South Korea and Australia. For years, she has led U.S. diplomatic efforts and crafted the strategies essential to advancing U.S. interests through partnership and cooperation with other nations, where possible, and the use of hard power when necessary. Ambassador Rice is expert in analyzing the challenges and opportunities facing U.S. leadership and America’s key partners in a rapidly evolving and unsettled 21st Century world.

Now What?
The election and early policy choices of President Trump have unsettled America’s friends and potentially yielded advantages to America’s adversaries. Ambassador Rice offers candid and incisive perspective on the key questions of the day: Where is the U.S. headed? What are the implications for the Post World War II liberal international order that America has built and led? What are the risks and implications of rising nationalist, populist movements in Europe, America, and elsewhere? Might we see the end of America’s alliances, the free, open trading system, respect for democracy, free press and human rights for all, as cornerstones of U.S. policy? What would these changes portend for America’s security, prosperity and global standing?

Leadership Lessons, Inspiration & Empowerment
Throughout her life, Ambassador Rice has achieved extraordinary academic and professional success in institutions and fields where African Americans are few and women are still in the minority. Happily married for 25 years, Ambassador Rice is the proud mother of two teenagers with very distinct characters and opinions, and was a devoted daughter to her parents, whom she helped care for attentively as they suffered illness and death during her tenure at the highest levels of government. Committed to inspiring and motivating the next generation, as well as women and girls, Ambassador Rice openly shares her personal story and the lessons she has learned and imparted on: the keys to successful leadership of teams and complex organizations; work/family balance; the value of public service; the challenges faced by women and minorities in professional leadership positions; and the importance of diversity in American society.