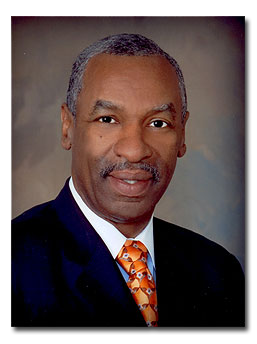 Former Congressman and Columnist for "The New York Times"

Former U.S. Representative Reverend Dr. Floyd H. Flake is the senior pastor of the 12,000 member Allen African Methodist Episcopal Church in Jamaica, Queens, and President of Edison Charter Schools. During his 25-year pastorate, Allen has become one of the nation’s foremost Christian churches and nonprofit corporations. The church’s annual operating budget of $29 million,…

Former U.S. Representative Reverend Dr. Floyd H. Flake is the senior pastor of the 12,000 member Allen African Methodist Episcopal Church in Jamaica, Queens, and President of Edison Charter Schools. During his 25-year pastorate, Allen has become one of the nation’s foremost Christian churches and nonprofit corporations.

The church’s annual operating budget of $29 million, expansive commercial and residential development, 500-student private school founded by Flake and his wife Elaine, and various commercial and social service enterprises have placed it among the nation’s most productive religious and urban development institutions. The 11 corporations, church administrative offices, school, and ministries comprise an 825-person workforce, making it one of the Borough of Queens’ three largest private sector employers.

Edison Charter Schools, the nation’s largest schooling company is a $350 million corporation with a capitalization value exceeding $1 billion dollars, which makes Flake one of the highest-ranking African American corporate executives in America. Edison operates 113 public schools nationwide, either through contracts with Boards of Education or as Charters.

From 1986-97 Flake served as a Representative in the U.S. Congress, and established a reputation for bipartisan, innovative legislative initiatives to revitalize urban commercial and residential communities. Flake also concentrated on garnering Federal resources and projects to his community. He won two regional facilities: The Federal Drug Administration (F.D.A.) and the Federal Aviation Administration (F.A.A.), which generates more than two thousand jobs while also upgrading the stability and the aesthetics of the District.

He was able to get the Clinton Administration to fund the Nation’s first One Stop Small Business Capital Center (Jamaica Business Resource Center J.B.R.C), a model for additional centers which are in the Federal Empowerment Zones.

Flake and the church have been profiled on CNN, CBS, BET, C-Span, PBS, and in “Time”, “Black Enterprise”, “Ebony”, “The New York Times” and “The Los Angeles Times”, among others. Reverend Flake is a proponent of market-oriented community and economic development in corporate settings, policy forums, seminaries and divinity schools and countless other forums as a way to widen the circle of inclusions for more Americans. He is considered the leading voice among African Americans for school choice.

Under Reverend Flake’s leadership, and true to its Christian doctrine of self-help and communal responsibility, Allen Church has provided resources and guidance for innumerable faith-based and secular institutions. Its net assets are valued at over $50 million.

Rev. Flake earned a Doctor of Ministry Degree from the United Theological Seminary in Dayton, OH and holds a B.A. from Wilberforce University. He also has numerous honorary degrees including Boston University, Fisk University, Lincoln University, and Cheney State.

Flake is a Senior Fellow at the Manhattan Institute for Social and Economic Policy, a columnist for the New York Post, a member of the Fannie Mae Foundation Board of Directors and an Adjunct on the Advisory Board of The Brookings Institute Center on Urban and Metropolitan Policy. Flake is also a board member of the Export-Import Bank, The Initiative for a Competitive Inner City, the New York City Investment Fund Civic Capital Corporation and Edison Schools.

Rev. Flake recently authored a book, entitled “The Way of the Bootstrapper: Nine Action Steps for Achieving Your Dreams”, which made The Los Angeles Times and Walden Books Bestsellers List.