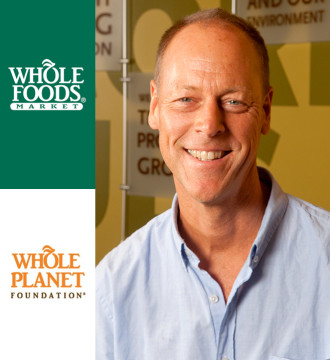 Walter Robb’s passion for organic, all-natural produce began over 40 years ago, gaining experience as a retailer, farmer and consultant throughout his career. Today as Co-CEO of the Fortune 500 Company Whole Foods Market, Robb is eager to provide accessible, healthy products to consumers across the country. Robb’s long and varied entrepreneurial history began in…

Walter Robb’s passion for organic, all-natural produce began over 40 years ago, gaining experience as a retailer, farmer and consultant throughout his career. Today as Co-CEO of the Fortune 500 Company Whole Foods Market, Robb is eager to provide accessible, healthy products to consumers across the country.

Robb’s long and varied entrepreneurial history began in 1976 when he opened the local grocery store Mountain Marketplace in Weaverville, California. Over 15 years later he sold the store to Whole Foods, joining the team as the local owner and operator. Robb’s savvy business expertise was recognized and two years later he was promoted to President of the Northwest Pacific Region.

From there, Robb gradually climbed the chain of command, as Executive Vice President of Operations and Chief Operating Officer and Co-President. Since 2010, Walter has been serving as co-CEO alongside Whole Foods founder John Mackey. Within the role he oversees the operations of six of Whole Foods Market’s twelve regions, as well as purchasing, marketing, distribution and quality standards.

Robb is an ardent organic advocate; he works his own organic garden and has served on the Board of Directors of the Organic Trade Association and the Organic Center for Education and Promotion.

He graduated Phi Beta Kappa from Stanford University in 1976 and is a proud father and grandfather with two sons, a daughter, and four grandchildren.

Building a Great and Enduring Brand

Purpose and Values in Business

He simply hit it out of the park. He was by far the best speaker we have ever hired. Personally I have never worked with a keynote who took so much time to make sure he got it right and connect with the local audience.

It was truly great. Not many people realize that “corporations” were invented to shield liability for the guys building the early railroads. They were not organized around the concept of “shareholder return” then, but rather provided a non-governmental vehicle for actually accomplishing a public good. Whole Foods epitomize all of those early notions of success. Thanks again for your true words of wisdom.

Our session with Walter was today and it was absolutely fantastic. It was clear that Walter put quite a bit of work into tailoring his discussion for us. He even incorporated several surprise pieces such as videotaped advice for Quest from leaders he knows at other organizations. It was truly beyond what we could’ve hoped for and we are so appreciative of his extra effort. It will help our organization immensely as we go into 2015 and beyond. He was a HUGE hit with our leadership.