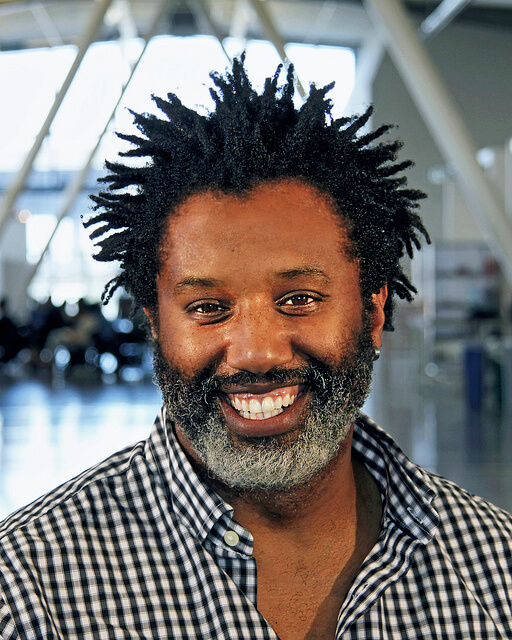 Mohammed Bilal is best known as “the even-tempered, dread- locked rapper guy” on MTV’s Real World III: San Francisco. He is also a diversity consultant, a musician, a poet, and an extraordinary writer who educates audiences about some of today’s greatest social problems. As facilitator of over 300 diversity presentations and workshops worldwide, his clients…

Mohammed Bilal is best known as “the even-tempered, dread- locked rapper guy” on MTV’s Real World III: San Francisco. He is also a diversity consultant, a musician, a poet, and an extraordinary writer who educates audiences about some of today’s greatest social problems.

As facilitator of over 300 diversity presentations and workshops worldwide, his clients have included Lucent Technologies, Progressive, Boston College, Friends of the Children, and the US Treasury.

Bilal has an MA in Diversity Studies and spent 14 years creating fun, innovative ways to educate people about diversity, AIDS and HIV prevention, drug and alcohol abuse, and responsibility. Bilal’s positive energy, unmistakable talent, and ethics have made him one of today’s leading role models and top diversity consultants. Through his AIDS awareness presentation, he offers solutions on how to better accept the reality of HIV and AIDS. His 12 Steps to Appreciating Diversity has helped thousands to embrace and incorporate social justice and equity into their daily lives.

Midnight Voices, the live instrumentation Hip-Hop band Bilal started with his best friend, Will Power, in 1990, has toured worldwide, and has won numerous awards including two SF Whammies and one Bay Area Music Award for best Hip-Hop group. Bilal’s first solo album, beatbox metafiction, is already being called groundbreaking for its sensitive lyrics and use of world music.

Bilal has collaborated and/or performed with such luminaries as Santana, The Ohio Players, Michele Shocked, Public Enemy, Ben Harper, De La Soul, Goapele, Martin Luther, and Primus. His music has been featured in the Sundance Award-winning film, Drylongso, and on TV shows such as Moesha and NBC’s mini-series Kingpin.

LoveLife: The Disempowerment of AIDS

How do we disempower HIV/AIDS? This lecture attempts to displace the negative stereotypes and mindsets attached to HIV/AIDS, and replace them with positive archetypes and empowered mindfulness. The main aim is to educate the spirit, to burst through the statistical ritual, and learn, at the most basic level, what HIV/AIDS means and how it lacks any real power to destroy love and happiness. The disempowerment of HIV/AIDS is most important for youth, who are developing (almost daily!) ways to look at themselves and the world. This lecture blends facts, figures, narratives, poetry, and hip-hop story-telling.

Do you prefer pink or blue, car or bike– black man or white woman? When choosing A over B- how do preconceived socio-cultural notions affect our daily choices and what role does prejudice play in our preferences? Preference & Prejudice is a fun, insightful examination of preference and its role in the ways we move toward and away from one another. Using his own personal narrative, Mohammed Bilal blends scholarship, rap and spoken word into a playful exploration of preference and desire, elucidating everyday methods for open interactions.

This presentation starts with a viewing of Toward Excellence, a short film that explores diversity and equity at American independent schools. It looks closely at the problematic 80’s, when many private schools intentionally/experimentally increased admittance of African-American students to meet self-imposed quotas. Through interviews with some of today’s top administrators—Al Adams (Lick-Wilmerding High School), Lucinda Lee Katz (Marin Country Day School) and others—the film offers valuable insights for building vibrant and inclusive school communities. Director Mohammed Bilal, who attended, taught and lead independent schools, facilitates the interactive Q & A, vicariously using the film and personal narratives as tools to unravel power and privilege, race, gender and space.

Mohammed was wonderful! The students (and my boss) loved his presentation. Even more, the students enjoyed having dinner and conversation with him after the conference. Mohammed made a huge impression on the students and one student even wants to bring him back again for a panel later in the year.

Mohammed was outstanding. Everything we had hoped for. Excellent facilitator, extremely professional, very dynamic, and appealing. I had extremely positive feedback from parents, teachers and students. Thanks for suggesting him.

Over the past few days, I’ve heard several students and staff discussing his talk. We couldn’t have had a better speaker, so please thank him for us.

We, at RIT, appreciate your continued commitment to pluralism in thought, perspective, and behavior that helps to build a culture of inclusiveness. It was a pleasure meeting you and having you take a glimpse back in time at our luncheon honoring those who paved the way for vibrancy today.