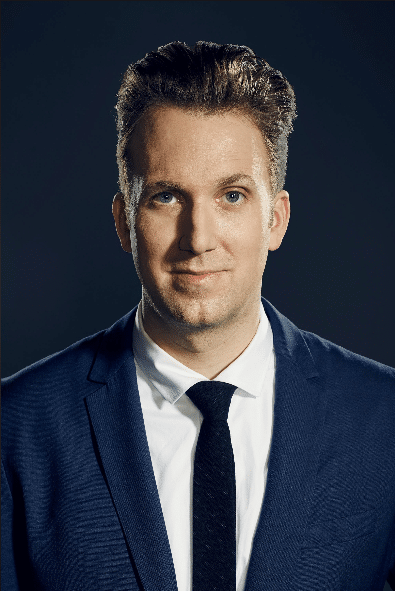 After performing improv for fifteen years, Jordan Klepper learned to challenge himself with the question, “How do I find the comedy in that?” As a result, he mastered using satire to address chaos. His ability to dissect current events with the power of humor offers hope in the darkness.

Jordan Klepper has been doing comedy for the better part of the last two decades. In addition to stand up and storytelling, he is currently covering the 2020 Presidential Election for the Daily Show in his recurring Jordan Klepper Fingers The Pulse segments.

He is the creator and star of the Comedy Central docu-series, Klepper. The show has been called “a fresh, powerful interpretation of news” (Detroit Free Press) that brings Klepper to “new comedic heights” (Vanity Fair). He was formerly host and executive producer of the weeknight Comedy Central talk show, The Opposition With Jordan Klepper.

Previously, he had been best known for his memorable appearances as a correspondent on The Daily Show with Trevor Noah, which he joined in 2014 under Jon Stewart and continued after Trevor Noah took over as host in 2015. In his time at The Daily Show, the show picked up an Emmy and Peabody award, and Klepper defined himself with both his studio work and segments in the field, ranging from his multi-part series exploring the reality of being a “Good Guy with a Gun“ to his field pieces at Trump rallies which have garnered millions of views.

In June of 2017, his one-hour special Jordan Klepper Solves Guns premiered on Comedy Central and focused on the alarming legal obstacles and enlightening personal testimony surrounding the issue of gun violence in America.

Klepper has also been seen on HBO’s Night Of Too Many Stars, The Who Was Show on Netflix, Bunk on IFC, Friday Night Tailgate on the Big Ten Network, and @Midnight on Comedy Central as well as writing on multiple projects from MTV2’s Charlamagne & Friends to HBO’s Ferrell Takes The Field. He has co-hosted Star Talk Live with Neil degrasse Tyson. His independent films, Peepers and TMI, have played at the Tribeca Film Festival and Slamdance. He spent nearly a decade in Chicago performing with The Second City as well as I.O. In New York he was a regular at the Upright Citizens Brigade.

His hilarious talks about politics captivate without disheartening the Left or the Right. Most recently, he has been traveling the country as a part of the Daily Show in a new segment called Jordan Klepper Fingers the Pulse. Klepper takes the current partisan outrage funnels it into humor–a goal achieved by his docuseries, Klepper. The series proved that mixing comedians with often dark and convoluted political topics provide a clear path for audiences to have constructive conversations that produce change.

Klepper is the king of inserting himself into the political scene in a laugh-out-loud way. His conversations bring audience to the frontlines. Klepper has been to the national conventions, got shamed at the UN, got Hillary Clinton to cold read the Mueller report, Carter Page asked him for a job, sunk a boat with environmental protesters and got arrested in Atlanta for protesting for DACA students. He has followed activists on the frontlines of American causes and has watched how collective action has always been the backbone of American change. He also struggled with being a good ally, and how privilege is not something that allows you to sit out.

After years of working with late-night hosts, politicians, and TV writers, Klepper has the opportunity to show less of the mask that comedians wear and more of who they are underneath. Audiences may even recognize themselves in his jokes, his questions and his journey.

An Evening with Jordan Klepper