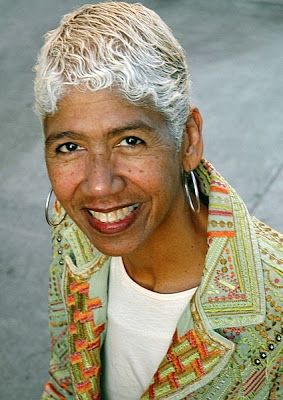 Ericka Huggins is a human rights activist, poet, professor, and former Black Panther leader and political prisoner. For the past 25 years, she has lectured throughout the United States, where her extraordinary life experiences have enabled her to speak personally and eloquently on issues relating to the physical and emotional well-being of women and children,…

Ericka Huggins is a human rights activist, poet, professor, and former Black Panther leader and political prisoner. For the past 25 years, she has lectured throughout the United States, where her extraordinary life experiences have enabled her to speak personally and eloquently on issues relating to the physical and emotional well-being of women and children, youth, education, incarceration, and the role of the spiritual practice in sustaining activism and promoting change.

Currently Huggins is a Women’s Studies professor and brings her legacy of social justice and spiritual activism to her lectures and teachings.

Huggins’ political activism began in 1963, when she attended the March on Washington and committed to moving from the sidelines to the frontlines in the global human rights movement. In 1969, at age 18, she became a leader in the Los Angeles chapter of the Black Panther Party with her husband John Huggins. Three weeks after the birth of their daughter, John Huggins was killed and Huggins was widowed. After returning her husband’s body to New Haven, Connecticut, Ericka opened a Panther chapter there.

In May 1969, Huggins and fellow Party leader Bobby Seale were targeted and arrested on conspiracy charges sparking “Free Bobby, Free Ericka” rallies across the country. The resulting trial, one of the longest and most celebrated of the era, spawned several books. While awaiting trial for 2 years before charges were dropped, including time in solitary confinement, Huggins taught herself to meditate as a means of survival. From this time on, she would incorporate spiritual practice into her community work and teaching as a tool for change – not only for herself, but for all people.

A lifelong writer and poet, upon release from prison in 1972, Huggins became writer and editor for the Black Panther Intercommunal News Service. Her book of poetry chronicling her experience of imprisonment and liberation, Insights and Poems, co-authored with Huey P. Newton, was published in 1974. Her poetry and writings have appeared in numerous magazines and books.

From 1973-1981, Huggins was Director of the Oakland Community School, a groundbreaking community-run child development center and elementary school founded by the Black Panther Party. She created the vision for the innovative curriculum for the school, which became a model for and predecessor to the charter school movement. In 1976, Huggins became both the first woman and the first Black person to be appointed to the Alameda County Board of Education.

In 1979, ten years after her release from prison, Huggins returned to California state and county prisons and jails to teach Hatha Yoga and meditation through the Siddha Yoga Prison Project. A focus of her volunteer effort was her work with incarcerated youth. She has continued this work with adults and, in addition, has continued to teach in homes for foster and adopted children and pregnant teens. For the past 15 years, she has also taught relaxation and mindfulness in California youth correctional facilities in addition to many Northern California public school districts and community colleges.

In 1990, at the height of public awareness of HIV/AIDS, Huggins was the first woman practical support volunteer coordinator at the world-renowned Shanti Project. She also developed a unique volunteer support program for women and children with HIV in the Tenderloin and Mission districts of San Francisco. During her time at Shanti Project, Huggins helped develop city-wide programs for the support of gay, lesbian, bi-sexual and questioning youth with HIV/AIDS.

Health and Well-Being for Women of Color

She has not only informed students about the history and significance of the Black Panther Party, she has also shown them how her own life was profoundly affected by the political currents of the 1960s. I know of no other lecturer who is so able to combine vivid personal anecdotes and astute historical analysis. My students have been enthusiastic in their praise of Ericka’s guest lectures.

Fueled by her compassion, commitment and deep concern for others, she not only instructs from her wealth of knowledge and experience, but makes an authentic, personal connection with her audience that elicits true transformational learning.

I know of no other lecturer who is so able to combine vivid personal anecdotes and astute historical analysis. My students have been enthusiastic in their praise of Ericka’s guest lectures.