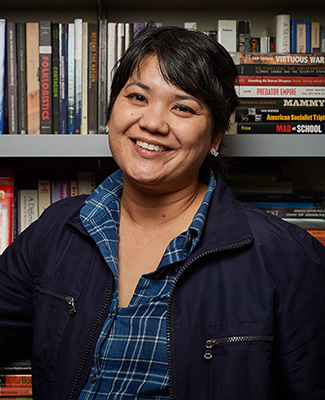 Professor of English and Asian/Asian American Studies and Associate Dean for Humanities and Diversity, Equity, & Inclusion, University of Connecticut

Her work on visual culture, popular culture, and graphic narrative has appeared in a number of collections and journals, including Modern Language Studies, Amerasia, Life Writing, and positions. She has also coedited a number of collections, which include Disability, Human Rights, and the Limits of Humanitarianism (Ashgate, 2014), Keywords for Asian American Studies (New York University Press, 2015), and Asian America: A Primary Source Reader (Yale University Press, 2017).

Professor Schlund-Vials is the current president of the Association for Asian American Studies (AAAS).

She is currently at work on two book-length projects: the first is concentrated on comics, video games, and the militarized excess; the second considers the role of U.S. empire in the making of dystopic prosthetic ecologies.

Prosthetic Ecologies
This talk examines the role disability plays in the making of refugee subjects; such subjects, as this presentation maintains, are necessarily situated in catastrophic environs formed in the troubling aftermaths of war, natural disaster, and economic crisis. To access the various man-made mechanisms responsible for bringing these disabled subjects “into being,” this talk strategically utilizes the following schema: “prosthetic ecologies.” “Prosthetic ecologies” operates as a flexible and generative analytic upon which to syncretically chart longue durée histories of state-sanctioned violence, state-authorized violation, and internationally-supported contravention during the Cold War era.