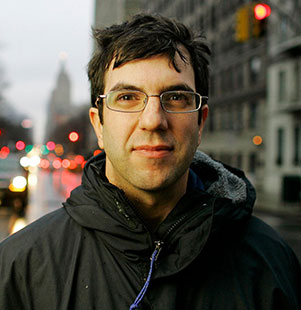 A.J. Jacobs is an author, journalist, lecturer and human guinea pig. He has written four New York Times bestsellers that combine memoir, science, humor and a dash of self-help. He is also editor at large at Esquire magazine, a commentator on NPR and a columnist for Mental Floss magazine. He is currently helping to build…

A.J. Jacobs is an author, journalist, lecturer and human guinea pig. He has written four New York Times bestsellers that combine memoir, science, humor and a dash of self-help.

He is also editor at large at Esquire magazine, a commentator on NPR and a columnist for Mental Floss magazine. He is currently helping to build a family tree of the entire world and holding the biggest family reunion ever in 2015.

His first book is called The Know-It-All: One Man’s Humble Quest to Become the Smartest Person in the World (Simon & Schuster, 2004). The memoir — which spent two months on the New York Times bestseller list — chronicles the 18 months Jacobs spent reading the entire Encyclopedia Britannica in a quest to learn everything in the world. It was praised by Time magazine, Newsweek, Vanity Fair, USA Today, Janet Maslin in the New York Times and AJ’s uncle Henry on Amazon.com.

After trying to improve his mind, he turned to his spirit. The Year of Living Biblically: One Man’s Humble Quest to Follow the Bible as Literally as Possible (2007) tells of his attempt to follow the hundreds of rules in the Good Book. It spent three months on the NYT bestseller list, and was praised by Publishers Weekly, Kirkus Reviews, The New York Times Book Review, the Los Angeles Times, USA Today and others. It appeared on the cover of the evangelical magazine Relevant, but was also featured in Penthouse. (Jacobs is proud to be a uniter, not a divider).

In 2012, Jacobs completed his mind-spirit-body self-improvement trinity with Drop Dead Healthy: One Man’s Humble Quest for Bodily Perfection. It is the tale of his quest to be as healthy as humanly possible for which he revamped his diet, exercise regimen, sleep schedule, sex life, posture and more. He wrote the book on a treadmill desk (It took him about 1,200 miles).

He also published a collection of essays called My Life as an Experiment: One Man’s Humble Quest to Improve Himself (2010). The book contains experiments featuring George Washington’s rules of life, marital harmony, marital disharmony, multitasking and nudity – not in that order. It includes the Esquire piece ‘My Outsourced Life,’ which also appeared in Tim Ferriss’s 4-Hour Workweek.

Jacobs’s next book will be about how we are all related. For the finale of the book, Jacobs will attempt to throw the largest family reunion in history. You are invited!

In addition to his books, Jacobs written for The New York Times, Entertainment Weekly, New York magazine and Dental Economics magazine, one of the top five magazines about the financial side of tooth care.

He has appeared on Oprah, The Today Show, Good Morning America, CNN, The Dr. Oz Show, Conan and The Colbert Report.

He has given several TED talks, including ones about living biblically, creating a one-world family, and living healthily.

He is a periodic commentator on NPR’s Weekend Edition Saturday, where he dispenses world-shaking historical trivia, including segments on tennis, royalty, and congress behaving badly (the 19th century Vermont lawmaker who spat chewing tobacco in his opponent’s face).

He writes a bi-weekly advice column for Esquire.com called “My Huddled Masses” Jacobs crowdsources the advice, asking his 120,000 Facebook followers for their insights on etiquette, moral dilemmas and how to deal with overabundant arm hair.

He writes another advice column for Mental Floss magazine in which he tries to make readers feel better by describing daily life past centuries. The good old days were terrible (“mind-bogglingly dirty, painful, fetid, smelly, sickly and boring”).

He is also a columnist for the LinkedIn Influencers program. His pieces include ‘The Six Most Important Business Lessons from All of History‘ and An Entrepreneur’s Most Powerful Tool: Self-Delusion.

Jacobs grew up in New York City. His father is a lawyer who holds the world record for the most footnotes in a law review article (4,812). His wife works for a highbrow scavenger hunt called Watson Adventures. He lives in New York with his family.

He wonders if he fooled anyone with this third-person thing, or if everyone knows that he wrote this bio himself.

The Importance of Self-Delusion in the Creative Process
How can we apply the idea of method-acting to our business lives? This is the question that life-hacker and best-selling author A.J. Jacobs tackles in this insightful (and highly entertaining) talk on the benefits of faking it until you make it. Through a series of examples from his own life, Jacobs shows just how much our behavior shapes our thoughts and our perceptions. Thus, if we want to change our attitude about something, the best way is to “act as if.”

In this talk, based on his latest book (which he wrote on a treadmill!), Jacobs shares his journey following the latest medical advice to become his healthiest self—which included trying every diet plan, every workout routine, and every self-improvement tip he could find. Armed with a healthier diet and a healthier outlook, Jacobs encourages audiences to be mindful of the steps they can take to find their own “bodily perfection.”

My Year of Living Biblically
Raised in a secular family, but increasingly interested in the role of religion in our world, AJ Jacobs decided to learn about the Bible firsthand: by living it. He vowed to spend a year following every single rule in the Bible from the famous ones (the Ten Commandments) to the often-ignored laws (don’t shave your beard, do not wear clothes made of mixed fibers — even stone adulterers). The result is a fascinating look at religion — one that is both reverent and irreverent, funny but deeply serious.

Change Your Behavior, Change Your Mind
Jacobs’s year of biblical living taught him that the most powerful way to change his mind was to change his behavior. The mind will catch up. As he says, “fake it till you make it.” It’s how he claims he learned to be a better person and a better businessman.

Walking a Mile in Others’ Shoes
Want to know what your customer is thinking? Live your life as the customer for a week. It’s the same with understanding how your rival thinks. Jacobs stresses the importance of immersing yourself in other points of view to make yourself a better businessperson. 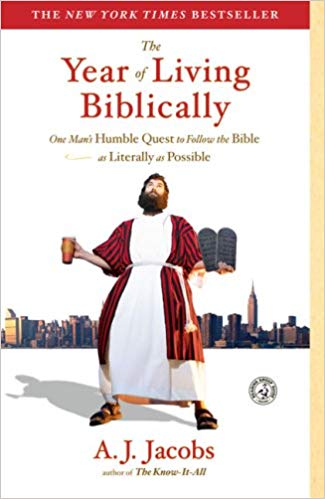 The Year of Living Biblically: One Man's Humble Quest to Follow the Bible as Literally as Possible 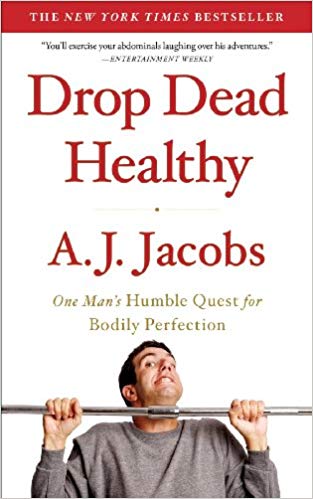 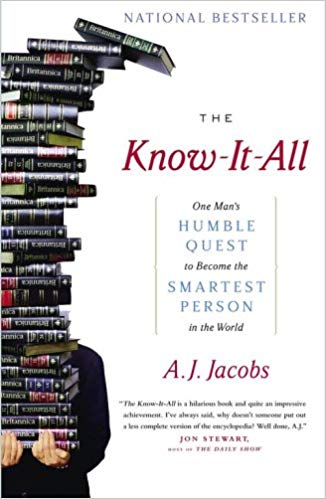 The Know-It-All: One Man's Humble Quest to Become the Smartest Person in the World 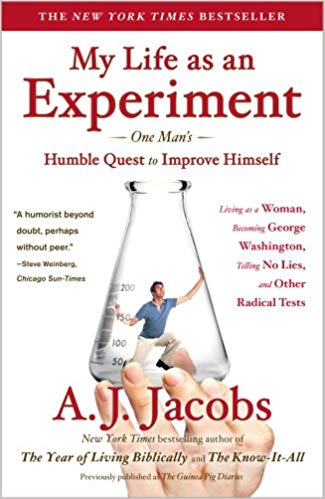 My Life as an Experiment: One Man's Humble Quest to Improve Himself by Living as a Woman, Becoming George Washington, Telling No Lies, and Other Radical Tests