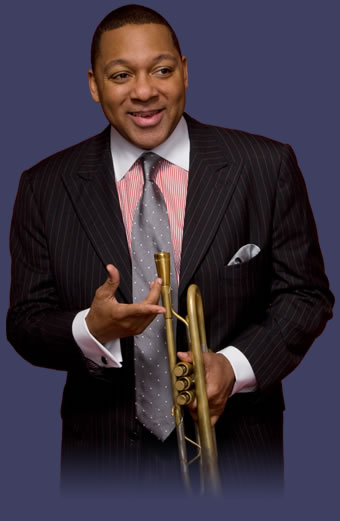 The most popular and acclaimed jazz musician of his generation, Wynton Marsalis is also a distinguished classical performer and the first artist to win Grammy awards for both jazz and classical recordings. He is available in either a lecture/demonstration format or a concert. Marsalis has achieved international success as a musician and bandleader, composer, educator,…

The most popular and acclaimed jazz musician of his generation, Wynton Marsalis is also a distinguished classical performer and the first artist to win Grammy awards for both jazz and classical recordings. He is available in either a lecture/demonstration format or a concert.

Marsalis has achieved international success as a musician and bandleader, composer, educator, author and arts advocate. He is the co-founder and artistic director of Jazz at Lincoln Center, a not-for-profit arts organization dedicated to inspiring and growing audiences for jazz.

Founded in 1987, Jazz at Lincoln Center operates from its home in New York City, the Frederick P. Rose Hall — the worlds first multi-venue performing arts facility designed specifically for the sound of jazz. Each season, the organization produces thousands of performances and educational events for people of all ages in New York and around the world.

Marsalis oratorio Blood on the Fields, featuring the Jazz at Lincoln Center Orchestra, won the 1997 Pulitzer Prize for music, the first ever awarded to a jazz musician. Winner of nine Grammy Awards, Marsalis is the only artist to win Grammys for both jazz and classical recordings. Marsalis other honors include Frances Chevalier dans lOrdre des Arts et des Lettres, the American Arts Councils Arts Education Award and the National Medal of Arts. He also has received 29 honorary degrees and was appointed a United Nations Messenger of Peace.

An Evening With Wynton Marsalis