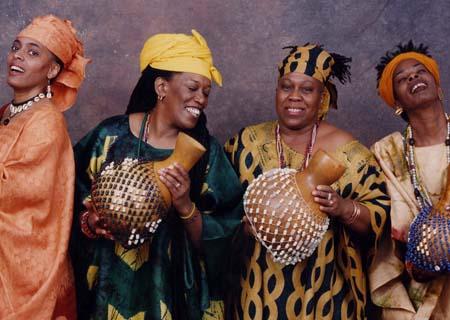 Women Of The Calabash

Combining traditional instruments with lush vocals, this renowned group performs original and traditional music from Africa, the Caribbean, and the Americas

Formed in 1978, Women of the Calabash is an astounding and phenomenally charged performance ensemble. The calabash is a fruit related to the squash and gourd family. For centuries it has been dried and hollowed, creating a resonant chamber from which a multitude of instruments can be made. Nelson handcrafts many of the instruments used by the company. Women of the Calabash’s performance is interwoven with informal dialogue highlighting the history and playing techniques of the various instruments used. Their performances have brought audiences to their feet at Lincoln Center’s Alice Tully Hall, Berkeley’s Zellerbach Hal, New York’s Town Hall and The Walker Art Center of Minneapolis. They have been heard on national radio and television, and have played to standing room only crowds across four continents. Women of the Calabash continues to perform in support of liberation struggles and environmental concerns. They have also performed for President Tomas Sankara of Burkina Faso, West Africa, and President Jean Bertrand Aristede of Haiti.

Over the years, Women of the Calabash has shared billing with many well known performers, including The Art Ensemble of Chicago, Phillip Glass, The Temptations, Hugh Masekela, Ashford & Simpson, Odetta, Los Munequitos de mantanza, and Richie Havens.

Cited as “Musicians Extraordinaire” by the National Council for Culture and Art, Women of the Calabash received the council’s prestigious Monarch Merit Award. The Company won a Blue Ribbon for Best Music Video 1988 from the American Film Festival. They also won the Cine 1994 Golden Eagle Award for composer and performer in the film The Visit. HBO featured Women of the Calabash in a Black History month profile in 1997. Their critically acclaimed CD The Kwanzaa Album delights listeners year round. Women of the Calabash views music as a continuum, moving across boundaries of style and instrumentation to give unity and context to the African American experience.

An Evening With Women of the Calabash

Women of the Calabash