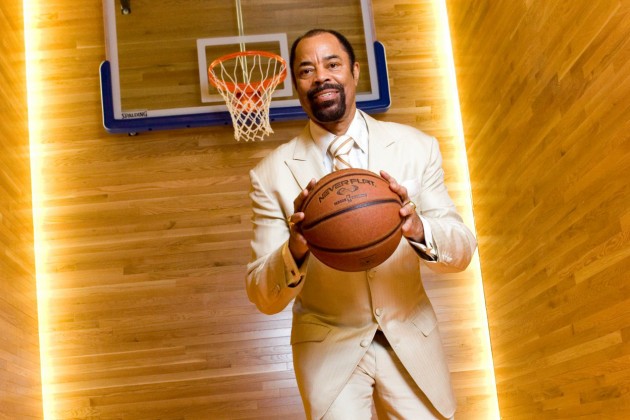 Former NBA Player, Known as "Cool" for his Flashy Style

New York icon and basketball legend Walt “Clyde” Frazier returns to MSG for his 21st season behind the microphone, first in radio, and then on TV. The Hall of Fame player and Knicks hero will serve his 10th season on MSG as the Knicks television analyst, and fourth with play-by-play announcer Mike Breen. In addition…

New York icon and basketball legend Walt “Clyde” Frazier returns to MSG for his 21st season behind the microphone, first in radio, and then on TV. The Hall of Fame player and Knicks hero will serve his 10th season on MSG as the Knicks television analyst, and fourth with play-by-play announcer Mike Breen. In addition to Frazier’s broadcasts, you can also find him blogging for MSG.com.

Frazier started his television career shortly after retiring in 1980, serving as an NBA analyst for TBS in 1981, broadcasting Hawks games in his hometown of Atlanta. He worked several other NBA telecasts for TBS before joining MSG prior the 1987-88 season. In 1992, 1996, and 1997, Frazier was a part of the MSG Knicks team that won the New York Emmy Award for “Outstanding Live Sports Coverage,” and was recognized in the category of “Sports Analyst” with a nomination in 2000.

Nicknamed Clyde by former Knicks backup center Nate Bowman who thought Frazier was as slick as Warren Beatty’s character in the movie “Bonnie and Clyde,” he brings a unique and innovative approach to the booth. Frazier uses an array of rhymes and a very impressive vocabulary during telecasts. He carries a dictionary in his pocket and is often found reading it when traveling with the team.

Frazier, who has been a staple of the New York community since he began his Knicks career in 1967, has continued to be an integral part of the New York City sports scene. Often seen signing autographs at the Garden, he continues to give back to New York City, making numerous appearances every year on behalf of Madison Square Garden’s Garden of Dreams Foundation, which aids New York area kids in crisis.

In 1998-99, Frazier earned a New York Emmy nomination in the category of “On-Camera Achievement: Sports Analyst/Color Commentator” for his work with the New York Knicks on MSG.

A graduate of Southern Illinois University, Frazier was the Knicks’ first round draft choice in 1967. He played 10 years with the Knicks, helping them capture two World Championships (1969-70 and 1972-73) and was named to the NBA’s All-Star Team seven times. He played three seasons with the Cleveland Cavaliers from 1977-78 to 1979-80, before retiring. Frazier was the Knicks all-time leading scorer, until Patrick Ewing broke his record for career points during the 1993-94 season.

Frazier’s uniform number (10), was retired to the Garden rafters on October 15, 1979 and he was elected to the Basketball Hall of Fame in 1986, along with Rick Barry and the late “Pistol” Pete Maravich. In 1996, Frazier was named one of the fifty greatest players in NBA history, as part of the league’s golden anniversary. He is also a member of the Madison Square Garden Walk of Fame and the Georgia Hall of Fame. His college uniform number (52) has been retired by Southern Illinois University.

Frazier lives in Manhattan but spends a great deal of time in St. Croix in the Virgin Islands, where he owns a bed and breakfast. He also enjoys gardening, jogging, sailing, and reading the Arts and Leisure section of The New York Times. He has one son, Walt III, and one daughter, Angel.

A Conversation With Walt Frazier