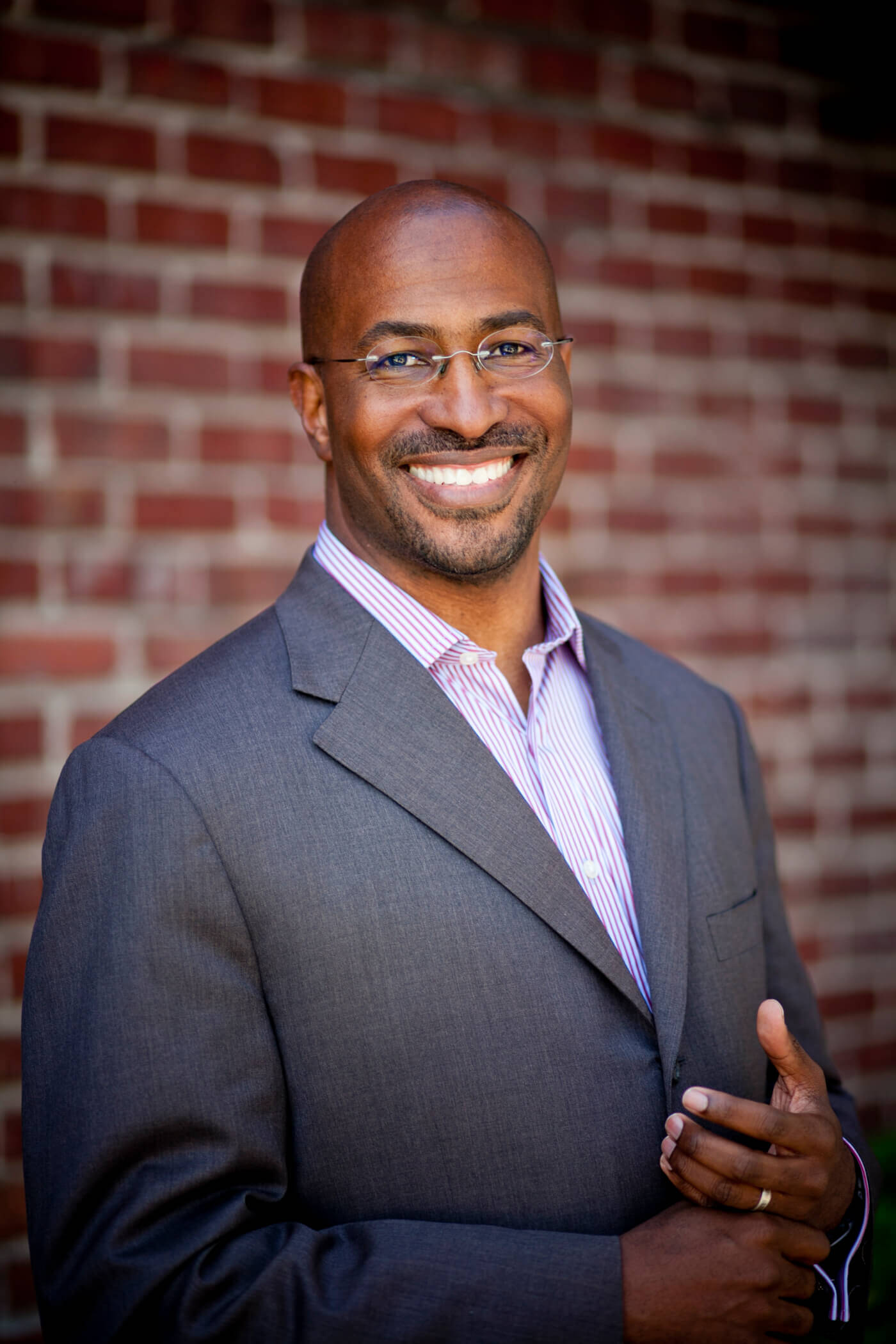 CNN personality Van Jones was a special advisor to the Obama White House. A Yale-educated attorney, he is also a best-selling author, an award-winning social entrepreneur and a national leader in the fight for clean energy. Van leads Dream Corps Unlimited, which houses powerful initiatives like #YesWeCode, Green For All and Beyond Prisons. An inspiring…

CNN personality Van Jones was a special advisor to the Obama White House. A Yale-educated attorney, he is also a best-selling author, an award-winning social entrepreneur and a national leader in the fight for clean energy. Van leads Dream Corps Unlimited, which houses powerful initiatives like #YesWeCode, Green For All and Beyond Prisons. An inspiring speaker, Van captivates audiences across the political spectrum with thought-provoking insights from the front lines of social change.

Van is also the president and co-founder of Rebuild the Dream, a platform for bottom-up, people-powered innovations to help fix the U.S. economy. A Yale-educated attorney, Van has written two New York Times bestsellers: The Green Collar Economy, the definitive book on green jobs, and Rebuild the Dream, a roadmap for progressives in 2012 and beyond. In 2009, Van worked as the green jobs advisor to the Obama White House. There, he helped run the interagency process that oversaw $80 billion in green energy recovery spending.

Van’s hard work has been acknowledged by a number of prestigious institutions and publications. His awards and honors include being named to Rolling Stones’s “12 Leaders Who Get Things Done” in 2012, TIME magazine’s “100 Most Influential People in the World” in 2009, Fast Company’s “12 Most Creative Minds on Earth” and Essence Magazine’s “25 Most Inspiring African Americans” in 2008. Van also served as distinguished visiting professor at Princeton University and a Senior Fellow at the Center for American Progress and American Progress Action Fund. He is presently a fellow at the MIT Media Lab.

Van is also the founder of Green For All, a national organization working to get green jobs to disadvantaged communities. He was the main advocate for the Green Jobs Act. Signed into law by George W. Bush in 2007, the Act was the first piece of federal legislation to codify the term “green jobs.” Under the Obama administration, it has resulted in $500 million for green job training nationally.

While best known as a pioneer in the environmental movement, Van has been hard at work in social justice for nearly two decades, fashioning solutions to some of urban America’s toughest problems. He is the co-founder of two social justice organizations: the Ella Baker Center for Human Rights and ?Color of Change.

Van also finds the time to serve on the board of several organizations and non-profits, including National Resource Defense Council, Presidio Graduate School and Demos. He recently co-founded and joined #YesWeCode as the Workplace Development Expert. The organization helps train 100,000 low-opportunity youth to become high-level computer programmers.

Protest & Politics In Age Of Twitter
Van has unique insight into America’s turbulent political scene. He has worked closely with political players at all levels – and across the spectrum. On the left, he has been allied with everyone from Richard Branson to Black Lives Matter. On the right, he has campaigned to win criminal justice reform alongside Newt Gingrich and Koch Industries. George W. Bush signed his first legislative proposal, the Green Jobs Act. Then President Obama appointed him to be special advisor on green jobs. Most recently, Van was “on the ground” in Ferguson, Charleston and Selma (for the 50th anniversary of the historic civil rights march there).

“Green For All”: Can Environmentalism Include Everyone?
The solar industry is booming. The fight for climate solutions is accelerating. The movement for a greener future is regaining steam. But will this renewed “green wave” lift ALL boats? Or will some places enjoy clean energy, green jobs and organic food, while others fall further behind? How can we avoid “ecological apartheid”? Van Jones has answers. He was the primary advocate for the Green Jobs Act of 2007. He is the founder of Green For All, a national organization working to grow the green economy in communities of color. He wrote the bestseller, The Green-Collar Economy – the definitive book on green jobs. And he was the special advisor on green jobs and innovation to the Obama White House.

#YesWeCode: Race, Gender & The Digital Divide
Former Obama advisor and CNN personality Van Jones created #YesWeCode to find real solutions. Housed at Dream Corps Unlimited, #YesWeCode is working to help 100,000 young adults of color – both women and men – find employment in the technology sector. Learn from the many insights that Van has gleaned by working directly with dozens of major tech firms, the Obama White House, and the nation’s top accelerated training programs. Hear how cultural barriers – on both sides of the divide – may be the biggest obstacles to an inclusive tech sector.

“Beyond Prisons”: Don’t Criminalize – Humanize
Civil rights attorney and TV personality Van Jones seeks peaceful streets through approaches that are smarter, fairer and less costly. His organization, Dream Corps Unlimited, houses the Beyond Prisons campaign. That initiative works to safely and smartly reduce the prison population by at least 50 percent – by promoting proven, bipartisan solutions. Neither Democrats nor Republicans see much sense in locking people away for long periods of time, often for petty offenses, and then denying them a chance to work, vote, rent an apartment or get a student loan for the rest of their lives.

“Green Jobs Not Jails”: Criminal Justice + Ecology
The USA has only five percent of the world’s population. Yet we produce: (a) about 25 percent of its greenhouse gasses and (b) about 25 percent of its prisoners. Coincidence? Van Jones doesn’t think so. He sees “mass incarceration” and the “mass extinction” as twin outcomes of the same false ideology: disposability. Industrial society behaves as if we have a throwaway planet – and throwaway people, too. To reverse course, Van says we must shrink the prison system and grow the green economy.

Rebuild The Dream: The Next American Economy
Imagine a new economy, where the founding principle of our country— liberty and justice for all—is deeply rooted in our economic philosophy and design, where businesses can profit alongside flourishing communities. The next American economy must value production over consumption, savings over credit and ecological restoration over ecological destruction. To achieve sustained prosperity, we need to transform our ideas and understanding around ownership and wealth—transcending consumerism, transforming corporations, and revitalizing communities. 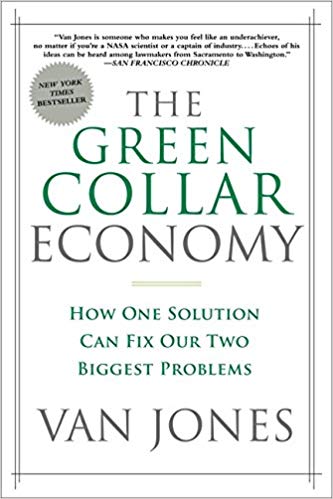 The Green Collar Economy: How One Solution Can Fix Our Two Biggest Problems 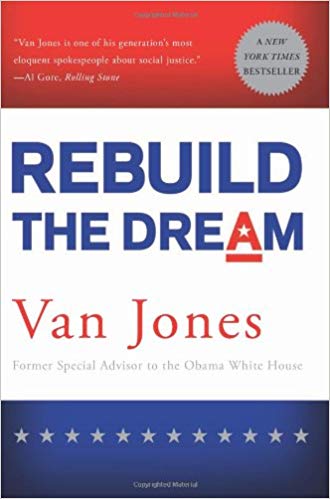 We wish to extend our most heartfelt thanks for Van’s presence and participation in this conference. Van’s wonderful presentation was pivotal in our reaching the goal of developing an understanding of the Commons as a shared language for our social, economic and environmental regeneration.

Thank you for your efforts to help us bring Mr. Jones to the University of Denver. We had a wonderful day with him. He impressed and inspired our faculty and students. The AHSS Distinguished Speaker Series at DU is an important piece of our community and student engagement efforts. I was pleased and proud to witness so many guests deep in conversations about the important issues that Van addressed in his book, Q&A sessions and keynote address. We had hoped his lecture would be fuel for a healthy debate and discussion. It surely was.

Van’s presentation was awesome. He was very personable and touched on many topics affecting small businesses today. He set the tone for the conference. Participants were fired up and excited for the rest of the conference. He kept us entertained plus shared valuable information. Thanks so much, he was a perfect fit for our conference.

Van was wonderful and I have only heard excellent things from students, staff and faculty around campus.

We’re getting great feedback from yesterday’s events. Van was a superstar and so very engaging.

The students’ response to Van’s words and presence has been nothing less than marvelous. Many students came up to me afterwards to say thank you for inviting him to speak at UCSC. They described being moved to tears by things that Van shared. His visit was timely and he spoke to the experiences of young people today. Thank you for your help in making the visit a reality.

It was great. A really diverse group of students, faculty members and community members came out. We’ve already gotten a lot of feedback from people who really enjoyed the event and felt pushed in their thinking around the topic. We are really glad he was able to come and be here in person. He stayed to talk with students who really appreciated it.