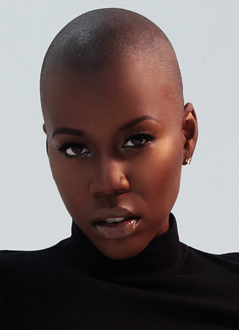 Growing up in South Central Los Angeles, the sounds of Gladys Knight and Whitney Houston drowned out the gunfire outside of Bozeman’s window. She took the stage for the first time in church at four-years-old, captivating the congregation and realizing her purpose in the world. After touring the globe in the Crenshaw High School choir, she formally embarked on this musical journey. In her early stages of the business, V caught the eye and the ear of Music Icon Kenny ‘Babyface’ Edmonds and signed her first deal to his Soda Pop label as the lead singer in a short lived girls group. Soon thereafter, a call from singer Timothy Bloom yielded her viral collaboration with the modern soul man—the sexy and provocative “Til The End of Time” in 2011. Cee Lo Green became equally transfixed, signing her to a production deal in 2012 as she turned heads with online releases such as “Poison”. However, Timbaland would set the stage for the world to properly get to know V in a big way. “We actually met years ago, and Timbaland told me he was going to come back for me,” recalls V. “This year, I got a random call from him, and we were in the studio a week later. I had always wanted to work with him. He knows how to bring the past, present, and future together. It was magic.

Within a few short days, V found herself recording a duet album with the Super Producer Timbaland entitled Opera Noir. The first single release is an infectious song called “Smile” pairing her with Timbaland for a soulfully sweet duet that evokes palpable passion. “What excites me about V is that she is excitement,” says Timbaland. “There’s nobody that you heard of with a tone like her in years. She is a diamond that’s been sitting there, and good ol’ Timbo discovered it. She’s my diamond. And she’s the best vocalist, to me, I’ve seen in years – meaning singing songs that touch your soul. She’s amazing. She’s groundbreaking.”

Keeping her ears, eyes, and heart open to social matters, current events, and injustices within our society, V. Bozeman soon released the powerful and provocative viral video Race Jones penned by Cee Lo Green, which faces these issues going on in today’s society from her point of view. Timbaland was so blown away by V’s vocal and visual performance that he contacted Oscar Nominated Director Lee Daniels and shared Race Jones. V immediately found herself on another exciting journey to Chicago where she was asked to audition for his new Hip Hop Drama on FOX called Empire. V landed the roll of Veronica and opened the Empire series with a heart wrenching ballad titled “What Is Love”. V’s performance captivated both viewers and listeners alike, garnering the second highest downloaded song from the Empire soundtrack.

V is currently putting the final touches on her heavily anticipated debut album with Timbaland entitled “Music Is My Boyfriend” filled with beautiful well-penned ballads of love, loss of love and overall hope for the world, while showcasing the soul and strength of her rich vocal tone, perfectly balanced with clever empowering up tempos that reminds us all that she is definitely a rose who found its way through the concrete. V’s not afraid to go anywhere. “There can still be a message within music,” she concludes. “Art is still about substance. This is my story. This is who I am.” Disruption is the first step towards change.

An Evening With V Bozeman

V. Bozeman "DO YOU REMEMBER ME" (Lyric Video)