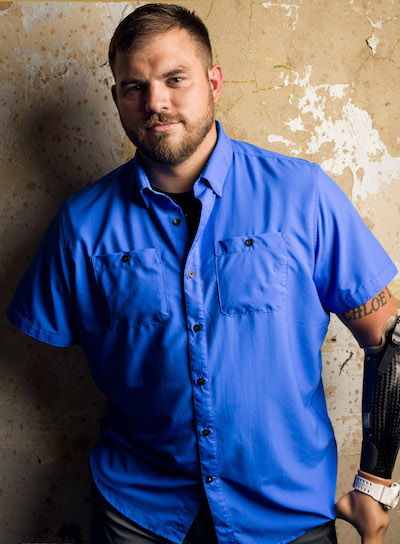 Retired United States Army Staff Sergeant Travis Mills of the 82nd Airborne is a recalibrated warrior, motivational speaker, actor, author and an advocate for veterans and amputees. Travis’s New York Times bestselling memoir, Tough as They Come, is currently available on sale in bookstores everywhere. Despite losing portions of both arms and legs from an…

Retired United States Army Staff Sergeant Travis Mills of the 82nd Airborne is a recalibrated warrior, motivational speaker, actor, author and an advocate for veterans and amputees. Travis’s New York Times bestselling memoir, Tough as They Come, is currently available on sale in bookstores everywhere. Despite losing portions of both arms and legs from an IED while on active duty in Afghanistan, Travis continues to overcome life’s challenges, breaking physical barriers and defying odds. Travis lives by his motto: “Never give up. Never quit.”

Travis’s story has been featured on local and national news including Fox News’ Happening Now with Jenna Lee and The O’Reilly Factor with Bill O’Reilly.

On April 10, 2012, United States Army Staff Sergeant Travis Mills of the 82nd Airborne was critically injured on his third tour of duty in Afghanistan by an IED (improvised explosive device) while on patrol, losing portions of both legs and both arms. He is one of only five quadruple amputees from the wars in Iraq and Afghanistan to survive his injuries.

Thanks to his amazing strength, courage, an incredible will to live, the heroic actions of the men in his unit, the prayers of thousands, and all the healthcare providers at the Walter Reed Army Medical Center, near Washington D.C., Travis remains on the road to recovery. Every day is a battle, but Travis continues to astound friends and family alike with his progress and with his amazing spirit. SSG Travis Mills is a genuine American hero, and for his incredible sacrifice, we are forever in his debt.

Travis also founded the Travis Mills Group, LLC where he consults with and speaks to companies and organizations nationwide inspiring all to overcome life’s challenges and adversity.

An Evening With Travis Mills
Travis Mills lives by his motto: “Never Give Up. Never Quit”, inspiring others to overcome life’s challenges and adversity. You will be very excited to hear about his inspiring story!