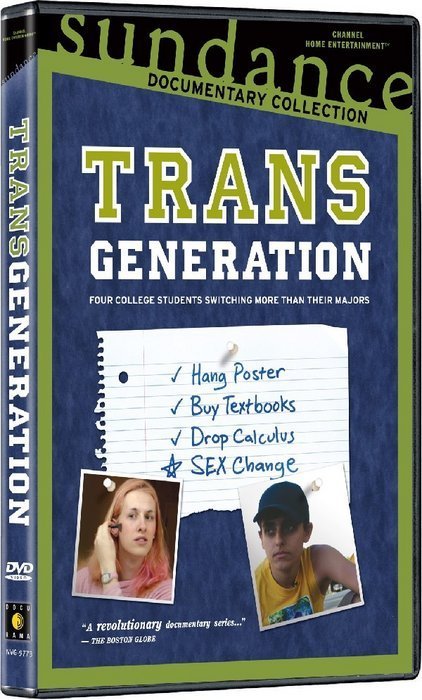 TransGeneration is a US documentary-style reality television series that affords a view into the lives of four transgender college students during the 2004–2005 academic year. Two of the students are trans women, and two are trans men. Each of them attends a different school, and they are each at a different stage of their academic…

TransGeneration is a US documentary-style reality television series that affords a view into the lives of four transgender college students during the 2004–2005 academic year. Two of the students are trans women, and two are trans men.

Each of them attends a different school, and they are each at a different stage of their academic career and transition. The series was commissioned by the Sundance Channel and produced by World of Wonder. It aired on the Sundance Channel from September to November 2005, and on Logo TV from January to February 2006. In Italy, it aired on Cult, a satellite television channel.

Dr. Jennifer M. DeCoste
serves as the Chief Diversity Officer at the University of Wisconsin Platteville. She oversees Multicultural Student Affairs, the Women’s and LGBTQ Center, Veteran’s Affairs, Services for Students with Disabilities, ADA, Affirmative Action, and International Programs. She earned her bachelor’s degree at the Hartt School of Music, master’s degree at the University of Hartford, and her Ph.D. from Penn State University.  Throughout her career she has worked as a public school educator, information technology trainer and manager, faculty member, and higher education administrator, with a passion for underrepresented students throughout her career. She also works as a private consultant and trainer on diversity topics, particularly focusing on the LGBTQ community. She also taught at the Penn State Altoona and Clarkson University. In 2012, she won Dissertation of the Year from the American Educational Research Association for her work with rural sex educators, which focuses on queer topics in the public school classroom. She is currently collaborating with Jay Garvey and Sue Rankin on a research project focusing on the experiences of LGBTQ faculty on college campuses.

T.J. Jourian
Is a social justice educator, learner, activist, and speaker, having spoken and provided trainings at hundreds of college campuses, conferences, and community-based organizations all over the country.  He is currently on the Training Team of the Brown Boi Project, a community of masculine of center womyn, men, two-spirit people, transmen, and our allies committed to changing the way that communities of color talk about gender. T.J. self-identifies as a pansexual queer Middle-Eastern Armenian trans*man, and his passion lies with supporting, learning from, and participating in social justice work that is intersectional, empowering, and dynamic – much like what he aspires to deliver through his own work.  He is proud to be part of the 2014 Trans* 100.

In 2005, T.J. was featured in the Sundance docu-series TransGeneration, depicting the lives of four trans* college students during a single academic year at four different institutions.  The series went on to win the 2006 GLAAD Media Award for Best Documentary. Currently, a PhD Candidate in ??Higher Education at Loyola University Chicago??, he is finishing his dissertation on trans*masculine college students’ conceptualizations of masculinity.

Genny Beemyn
Has published and spoken extensively on the experiences and needs of transgender people, particularly the lives of gender-nonconforming students. Ze has written or edited eight books/journal issues, including special issues of the Journal of LGBT Youth on “Trans Youth” and “Supporting Transgender and Gender-Nonconforming Children and Youth” and a special issue of the Journal of Homosexuality on “LGBTQ Campus Experiences.” Genny’s most recent work, written with Sue Rankin, isThe Lives of Transgender People, which was published by Columbia University Press in November. Currently, ze is finishing a book on the history of LGBT life in Washington, D.C. In addition to being the director of the Stonewall Center, Genny is also a board member of the Transgender Law and Policy Institute and an editorial board member of theJournal of LGBT Youth, the Journal of Bisexuality, the Journal of Homosexuality, and the Journal of Student Affairs Research and Practice. Genny has a Ph.D. in African American Studies and Master’s degrees in African American Studies, American Studies, and Higher Education Administration. Ze is also an avid cross-country runner and likes the challenge of biking up mountains.

Raci “Raycee” Ignacio
Raci was born on February 8, 1985 in the Philippines. She attends California State University, Los Angeles on a merit-based scholarship, and must maintain a GPA of at least 3.5. She moved to the United States at the age of 15, and this is her first year at university. Raci is on hormone replacement therapy (HRT). She wants to be seen as normal girl, and is reluctant to reveal that she is a trans woman. She is also poor and hearing-impaired;[19]:201 she speaks English as a second language, and she is living away from her mother for the first time.[20] Raci and her aunt rent a small room in Eastside Los Angeles.

Andrea Gabrielle “Gabbie” Gibson
Gabbie was born on April 22, 1985 in Redlands, California. She is a sophomore at the University of Colorado at Boulder, where she majors in computer science. She started HRT in February 2004, and since then has lived full-time as a woman. She is a resident assistant in a dormitory. Because of their community restroom policy, the university assigned Gabbie a private room with attached bath. She has become active in LGBT student activities, and anticipates her upcoming genital reassignment surgery. Gabbie is candid with others about being trans, but she wants to be understood as a person with more to her identity than her gender.

Lucas Cheadle
Lucas was born on November 3, 1982 in Oklahoma. He attends Smith College, a private, women-only college in Massachusetts. Lucas is a neuroscience major in his senior year; he has fought for transgender rights for his entire college career. He has not yet started hormone replacement therapy, and is cautious about it. Lucas’ parents are divorced; his mother and brother know that he is trans, but his father does not. Lucas plays guitar in a punk band, and lives in an apartment with his friend Kasey, a trans man who has been on HRT for eight months.

A Conversation With The Cast Of TransGeneration

Transgeneration, Episode One, Part One