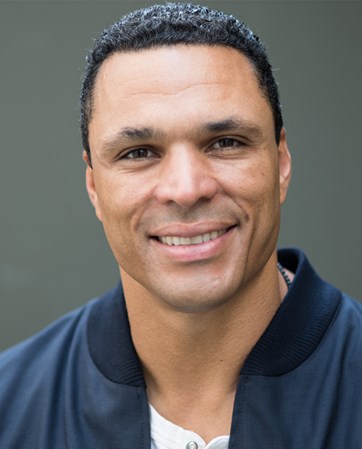 Pro Football Hall of Famer Tony Gonzalez is a former Kansas City Chief and Atlanta Falcons All-Pro tight end. He is currently a fixture on FOX NFL Kickoff, the FOX NFL Sunday show, and on the FOX NFL Thursday pregame show. An author and an entrepreneur, Gonzalez develops multi-media programs that celebrate and advocate sports…

Pro Football Hall of Famer, Tony Gonzalez is a former Kansas City Chief and Atlanta Falcons All-Pro tight end. After a 17-year long career, he became an analyst on CBS’ NFL pregame show ‘NFL Today’ before transitioning to FOX, where he is a fixture on FOX NFL Kickoff as well as the FOX NFL Sunday show. In 2019, Tony became an analyst on TNF on Fox Pregame show, alongside fellow Hall of Famers, Michael Strahan, Howie Long, and Terry Bradshaw. He also is an author and an entrepreneur, developing multi-media programs that celebrate and advocate sports for children in an educational format.

His latest venture includes a new podcast, Wide Open with Tony Gonzalez, is an unrestrained and raw look into how to embrace all the revolutionary change taking place in the world of health, mindset, wellness, family and more. Each week, Gonzalez takes you through a different side of his journey and brings on legendary guests to dive deeper into these topics so you can level up your life physically, mentality, and spiritually, in order to have a more successful and enlightened existence.

In addition to an author and actor, Gonzalez is also an entrepreneur, developing multi-media programs that celebrate and advocate sports for children in an educational format. Active in the health, wellness and fitness space, Gonzalez was an investor and trainer in the fitness app FITSTAR, which was acquired by Fitbit

Gonzalez’s philanthropic endeavors include a partnership with the Boys and Girls Clubs; Shadow Buddies, an organization that provides emotional support through education regarding illness, disability or medical treatments, as well as being named an ambassador for Scholars’ Hope, working with underserved children in Huntington Beach, Calif.

Gonzalez inspires worldwide audiences with his thoughtful insights on health, how to evolve and better yourself, overcoming the fears holding you back from reaching your goals, and shares lessons learned from his storied career.

An Evening With Tony Gonzalez

Thriving on Fear and the Journey Towards Redemption with Mike Tyson