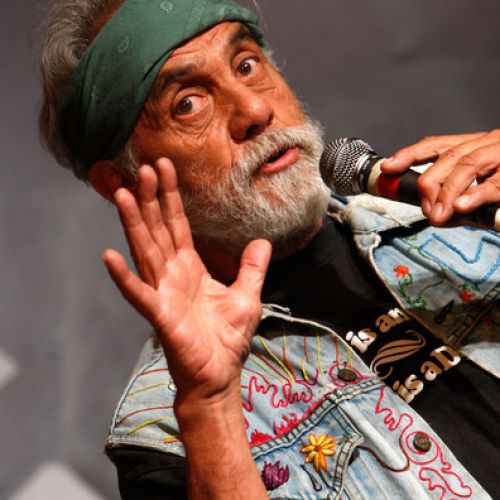 Half of the Comedy Duo Cheech & Chong

Grammy Award-winning comedian Tommy Chong is legendary for his invaluable contribution to American counter-culture as part of the iconic comedy duo Cheech & Chong.

Grammy Award-winning comedian Tommy Chong is legendary for his invaluable contribution to American counter-culture as part of the iconic comedy duo Cheech & Chong. During their reign, the twosome recorded six gold comedy albums, including the 1973 Grammy winner Los Cochinos, and starred in eight films, most of which Chong co-wrote and directed. The first, Up In Smoke, was the highest grossing comedy of 1978, topping $100 million at the box office. Others were Cheech & Chong’s Next Movie, Nice Dreams, Things Are Tough All Over, Cheech & Chong: Still Smoking and The Corsican Brothers.

Born in Edmonton, Alberta, Canada, Tommy began his entertainment career as a musician in a Canadian-based rhythm and blues band. Eventually, he landed a gig with the Vancouvers and co-wrote the band’s 1960’s hit, “Does Your Mama Know About Me.” From here, Chong eventually turned towards the life as an actor. The first step was forming City Works, an improvisational group where he consequently met his future comedic partner, Richard “Cheech” Marin.

Throughout the 1970’s Cheech and Chong earned a massive following until eventually, the duo had run its lengthy and prosperous course and they both embarked on solo careers. Tommy has appeared in several films including 1990’s Far Out, Man! and National Lampoon’s Senior Trip. Chong has also starred, most notably, as ‘Leo’ on Fox’s That 70’s Show, and has guest starred on ABC’s Dharma & Greg and The George Lopez Show.

Chong most recently released Cheech & Chong: Almost Legal Book for Stoners and Cheech & Chong: The Unauthorized Autobiography. These books served as a follow-up to his New York Times bestseller The I Chong: Meditations from the Joint which chronicles Chong’s arrest for shipping bongs across the country as well as his days in jail and the humorous encounters of his 9 month prison stint.

The award-winning documentary A/K/A Tommy Chong features the journey that Chong took after a fully armed SWAT team raided the comedian’s home in February of 2003. Tommy Chong was sentenced to 9 months in federal prison for conspiracy to manufacture and distribute drug paraphernalia through “Chong Glass,” a family business specializing in handmade glass water pipes, or “bongs.”

In 2008, Tommy Chong reunited with his old comedy partner, Richard “Cheech” Marin to announce their first tour in over 25 years. The “Cheech & Chong: Light Up America & Canada” tour has proved to be one of the most successful comedy tours of that year, selling out multiple shows from coast to coast.

An Evening with Tommy Chong

Tommy Chong - Sting Operation: When the DEA Is Onto You - This Is Not Happening