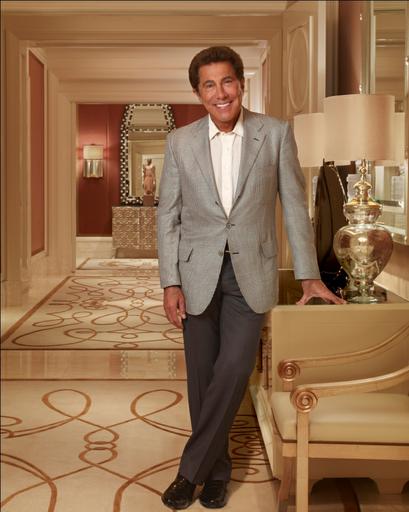 Casino Developer Stephen A. Wynn is widely credited with transforming Las Vegas into a world renowned resort and convention destination. As Chairman of the Board, President, and Chief Executive Officer of Mirage Resorts, Incorporated, Mr. Wynn envisioned and built The Mirage, Treasure Island, and Bellagio, boldly conceived resorts that set progressively higher standards for quality,…

Casino Developer Stephen A. Wynn is widely credited with transforming Las Vegas into a world renowned resort and convention destination. As Chairman of the Board, President, and Chief Executive Officer of Mirage Resorts, Incorporated, Mr. Wynn envisioned and built The Mirage, Treasure Island, and Bellagio, boldly conceived resorts that set progressively higher standards for quality, luxury, and entertainment. Now, as Chairman of the Board and Chief Executive Officer of Wynn Resorts, Limited, Mr. Wynn has developed both Wynn Las Vegas which opened on April 28, 2005 and Wynn Macau which opened in September of 2006. Both are among the world′s preeminent luxury hotel resorts. An expansion of Wynn Las Vegas, Encore, was opened in late 2008.

Mr. Wynn began his career in 1967 as part owner, Slot Manager, and Assistant Credit Manager of the Frontier Hotel. Between 1968 and 1972 he also owned and operated a wine and liquor importing company. But it was an entrepreneurial real estate transaction with Howard Hughes in 1971 that produced sufficient profits for a major investment in the landmark Golden Nugget Casino. Once known only as a “gambling joint,” Mr. Wynn transformed the Golden Nugget into a Four Diamond resort known for elegance and personal service. By 1973, at age 31, Mr. Wynn controlled the property and began developing the Golden Nugget as a complete hotel resort.

In 1978, Mr. Wynn used profits from the Golden Nugget in Las Vegas to build the 506-room Golden Nugget Hotel & Casino on the Boardwalk in Atlantic City. The resort became known for its elegant facilities, television ads featuring Frank Sinatra, and its impressive lineup of superstar entertainment. From its opening in December 1979, until its sale in 1986, the Atlantic City property dominated the market in revenues and profits in spite of its smaller size.

In 1987, Mr. Wynn sold the Atlantic City Golden Nugget, which had cost $160 million, to Bally for $450 million and turned his creativity to developing what would become the company′s flagship property — The Mirage. Opened in November 1989, the elegant hotel, with its imaginative erupting volcano and South Seas theme, ignited a $12 billion building boom that catapulted Las Vegas to America’s number one tourist destination and fastest growing city. In 1991, Golden Nugget Incorporated was renamed Mirage Resorts, Incorporated.

In October 1993, Mr. Wynn opened Treasure Island, establishing a new paradigm by which casino theme resorts are designed. At the front corner of the resort, the Battle of Buccaneer Bay was acted out on a full size pirate ship. Inside, the Four Diamond property, with its romantic tropical theme, is one of the city’s most electrifying casino resorts.

In October 1998, Mr. Wynn raised the bar again when he opened the opulent Bellagio, a $1.6 billion resort considered among the world′s most spectacular hotels. With its sumptuous guest rooms, high end retail stores, and traditional European feel, Bellagio appealed to an audience that long overlooked Las Vegas as a vacation destination. Today, visitors line the street in front of the hotel to watch another Steve Wynn attraction, the “Dancing Waters” — shooting fountains, choreographed to music, that “dance” on the hotel’s 8.5 acre man-made lake.

In 1999, Mr. Wynn brought Mirage Resorts′ standard of style to beautiful and historic Biloxi, Mississippi where he oversaw development of the 1,835-room Beau Rivage. Blending Mediterranean beauty with Southern hospitality, the resort was the centerpiece of a building boom that established Biloxi as a regional tourism center along the Mississippi Gulf Coast.

In June 2000, Mr. Wynn sold Mirage Resorts, Incorporated to MGM for $6.6 billion and purchased Las Vegas′ legendary Desert Inn Resort and Casino. The Desert Inn was closed in August 2000 and, on this site, Mr. Wynn began developing Wynn Las Vegas, a 2,700-room luxury casino resort that has inspired yet another wave of development on the Strip. Concurrently, Wynn Resorts developed its Asian flagship casino resort in Macau, China where the company has been awarded a 20 year concession by the Macau government. He spent $1.2 billion to develop the 600-room Wynn Macau and opened it in 2006. In 2005, the Association of Travel Marketing Executives awarded Mr. Wynn the ATLAS Lifetime Achievement Award for his innovation in building resorts in Las Vegas.

Mr. Wynn is active in the community and is Chairman of the Advisory Board to the University of Utah′s Moran Eye Institute. He also serves as a trustee of his alma mater, the University of Pennsylvania, and serves on the Board of the George Bush Presidential Library.

In 2006 brought many accolades to Mr. Wynn. Time Magazine recognized him as one of the “World′s 100 Most Influential People,” and he was awarded an honorary doctoral degree at the University of Pennsylvania′s 250th Commencement Ceremony in recognition of his transformative vision of Las Vegas (he has also received honorary doctorates from the University of Nevada, Las Vegas and Sierra Nevada College in northern Nevada).

In late 2006, President George W. Bush appointed Mr. Wynn to serve on the Board of Trustees for the world-renowned John F. Kennedy Center for the Performing Arts in Washington, DC and in November he was inducted into the American Gaming Association′s (AGA) Hall of Fame.

In 2008, in the mist of the nation′s worst recession in generations, Wynn opened yet another Strip megaresort, the $2.3 billion Encore. It was built next to Wynn Las Vegas and had a similar curved brown-glass-tower exterior. But while the Wynn was themed after New York neighborhoods, the Encore with its natural light and large windows reflected the sunbathed ambience of St. Tropez in southern France. It 2,034 rooms were all suites. It also offered five restaurants, the most prominent of which was Sinatra, featuring Frank Sinatra memorabilia, including his Academy Award for best supporting actor in From Here to Eternity. Elsewhere there were a nightclub with a 10-foot rotating chandelier and the Switch restaurant featuring changing walls and ceiling.

Stephen A. Wynn was born in New Haven, Connecticut on January 27, 1942. He graduated with a Bachelor of Arts degree in English Literature from the University of Pennsylvania and, in 1963, married Elaine Farrell Pascal. They have two daughters, Kevyn and Gillian.

Creating Vision
A maverick of the business world and a legend in real estate, Steve Wynn created the urban mega-success that is Las Vegas today. It was his flagship property, the Mirage, that ignited a $12 billion building boom and transformed the aging casino town into the fastest growing metropolis and one of the most popular tourist destinations in the world. Creator of such experience-oriented resorts as the Bellagio and Treasure Island in Las Vegas and the Beau Rivage in Mississippi, Wynn regales his audiences with riveting behind the scenes stories about the journey that put him at the top of his field.

Wynn′s vision, entrepreneurial brilliance and a refusal to be slowed by any obstacle, set the standard for achievement. Struggling with the personal challenge of losing his sight, Wynn continues to offer an inspiring tale of success. Using anecdotes from the worlds of business and entertainment, he challenges audiences to raise their own standards of achievement, and then surpass them.