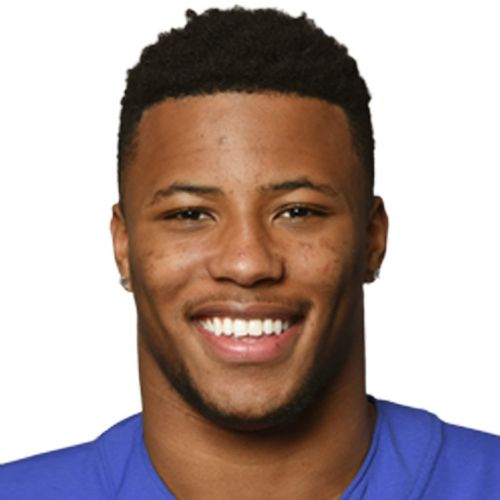 Saqun Barkleoy, is a running back for the New York Giants of the National Football League. He played college football at Penn State for three seasons, running for 3,843 yards with 43 rushing touchdowns, while garnering 1,195 receiving yards with 8 touchdown receptions.

Saquon Barkley, is a running back for the New York Giants of the National Football League. He played college football at Penn State for three seasons, running for 3,843 yards with 43 rushing touchdowns, while garnering 1,195 receiving yards with 8 touchdown receptions.

He totaled 5,557 all-purpose yards in his three-year collegiate career for the Nittany Lions. Barkley received national attention and finished fourth in Heisman Trophy voting with 304 total votes and third in Maxwell Award voting. He also received multiple national and Big Ten Conference awards and recognition. During Barkley’s three-year collegiate career, he broke and set numerous Penn State records including most rushing touchdowns in a career, most rushing yards by a freshman and sophomore as well as most total yards in a single game.

Barkley was drafted with the second overall pick by the New York Giants in the 2018 NFL Draft. As a rookie during the 2018 NFL Season set numerous franchise and league records. Barkley finished the 2018 season with 1307 rushing yards and 15 total touchdowns. He was named AP NFL Offensive Rookie of the Year along with being named to the 2018 Pro Bowl and PFWA All-Rookie Team.

During the 2018 season Barkley was a member of the NFL’s “My Cause, My Cleats” charity. He used this platform to raise money and awareness for 22Q a rare genetic disease. Barkley’s niece Amirah was diagnosed with the disease at the age of five.

An Evening With Saquon Barkley

Should the Giants pay Saquon Barkley?