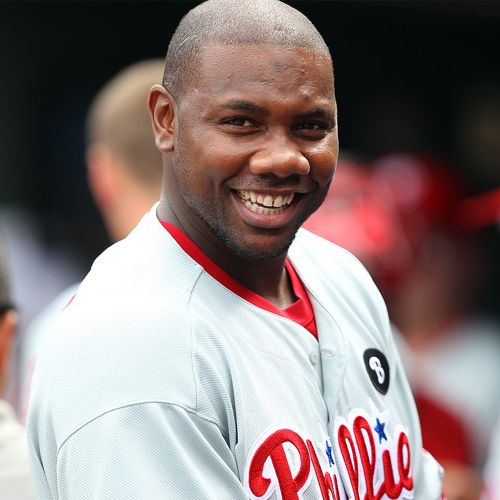 As the fastest player in history to reach 100 home runs, 200 home runs, 250 home runs and 100 RBIs, Ryan has taken the game by storm in eleven seasons in the majors and made a name for himself as one of the most prodigious power hitters of this generation.

As the fastest player in history to reach 100 home runs, 200 home runs, 250 home runs and 100 RBIs, Ryan has taken the game by storm in eleven seasons in the majors and made a name for himself as one of the most prodigious power hitters of this generation.

Howard’s career started with a bang when he was named NL Rookie of the Year in 2005. He capped off a stellar year in 2006 with the National League MVP award, and in 2007, Ryan led the Phillies to their first NL East championship in 14 years.

During the 2008 campaign, Howard led the Major Leagues in Home Runs with 48, while driving in 146 runs, leading to a 2nd place finish in the National League MVP voting. However, his greatest achievement was his World Series contributions where he helped the Phillies win the 2008 title. In 2009, Ryan launched the Ryan Howard Family Foundation and the Phillies again repeated as National League Champions. After yet another dominant season, Howard was widely regarded as the greatest power hitter in all of baseball.

The following season, Howard became the quickest player in history to reach 250 home runs, in only 855 games. In 2011, he had his sixth consecutive 30 home run and 100 RBI season, which was a Phillies franchise record. Fighting injuries for the next three seasons, in 2014 Howard hit a three-run home run for the 1,000 RBI of his career, becoming the fastest player in MLB history to achieve the feat.

Throughout his career, Howard has been named a five-time All-Star, a two-time NL home run champion, a three-time NL RBI leader and the 2006 Home Run Derby winner.

With his incredible talent, charm, and charisma, it’s no surprise that Ryan has become a marketer’s dream, securing national corporate partnerships with Subway, Adidas, POWERade, and Sony PlayStation.

An Evening With Ryan Howard