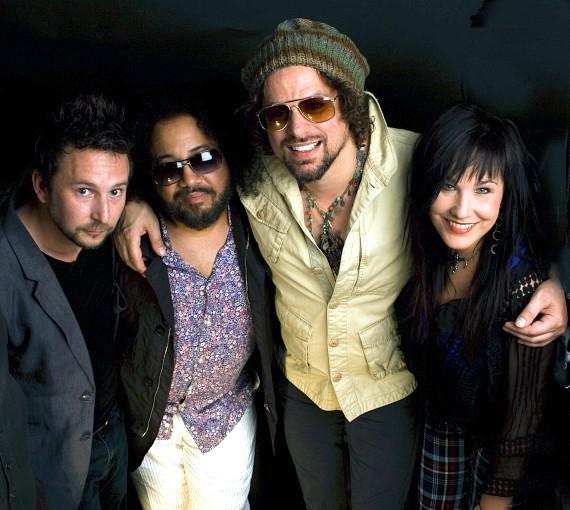 It has been 25 years since their first album, Cruel Sun, and Rusted Root is still going strong. Having collaborated with one another for what is approaching three decades they have honed the perfect combination of musical intuition, freedom, and virtuosity, which has allowed them to organically shape shift into their own distinct and undeniable…

It has been 25 years since their first album, Cruel Sun, and Rusted Root is still going strong. Having collaborated with one another for what is approaching three decades they have honed the perfect combination of musical intuition, freedom, and virtuosity, which has allowed them to organically shape shift into their own distinct and undeniable vision.

With eight albums under their belt, over three million records sold worldwide, and countless nights on the road, Rusted Root, transcends age, generation, culture, and musical style. Their music has been featured in films like Ice Age, Twister, and Matilda, TV shows like New Girl, Ally McBeal, Charmed, and Chuck as well as an Enterprise-Rent-A-Car campaign. Bassist and vocalist Patrick Norman says, “From the very first time we played music together, I knew we had something special.

The music and the enjoyment of creating and playing with one another I feel is the driving force behind this band.” The powerhouse ensemble’s sweat-inducing and hypnotic live performances have followed them to tour alongside everyone from Santana, Dave Matthews Band, The Allman Brothers Band, Robert Plant and Jimmy Page’s reunion tour and countless others; most recently Toad The Wet Sprocket in 2016.

In 1992 Rusted Root released Cruel Sun independently and two years later, while signed to Mercury, they released their platinum-selling breakthrough, When I Woke, which spawned the Top 40 hit “Send Me On My Way”, that went on to chart on Billboard’s Hot 100. With follow up albums Remember (’96), Rusted Root (’98), and Welcome To My Party (’02), the band had plenty of material to fill the double album Rusted Root Live released in 2004 on their own Touchy Pegg label, following the re-release of the newly re-mastered Cruel Sun in 2003. Rusted Root continued to tour relentlessly between the release of Cruel Sun and the 2009 release of Stereo Rodeo. 2014 saw the release of their latest studio album The Movement, which is an energized and poetic collection of originals that capture the Pittsburgh based unit at their best.

The past few years have found Rusted Root on a never-ending tour. A major career highlight in the Springtime of 2014 and 2015 was touring with The Wailers. Michael Glabicki says, “The Wailers are what music in its spiritual form is about, and I feel it was an honor to play with them.” And bassist Patrick Norman effuses “They’re legends, they’re icons, it’s rock and roll. It brings back memories of being five years old listening to I Shot The Sherriff.”

As they have in the past, Rusted Root is currently working on their next record by honing their new songs while on tour. The band is looking forward to putting the finishing touches on their new collection of songs, and aim to release the new record in the next year.

An Evening With Rusted Root