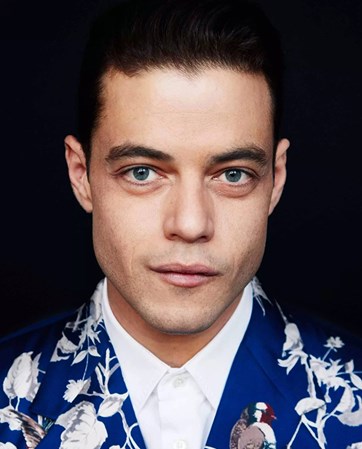 Rami Malek won an Oscar for his ground-breaking performance as Freddie Mercury in Bohemian Rhapsody.

Previously, Rami can be seen in Papillon opposite Charlie Hunnam. Prior to that, Rami was in NYC filming season 3 of the USA hour-long drama Mr. Robot, for which he received an Emmy win and nomination for Best Actor in a Drama Series for playing the role of “Elliot Alderson.” He received SAG Award and Golden Globe nominations for his performance in the show, which won the Golden Globe for Best Television Series – Drama in 2016.

He starred in the independent feature Buster’s Mal Heart, and also appeared on screen in Night at the Museum 3 opposite Ben Stiller. Rami appeared in Paul Thomas Anderson’s The Master opposite Philip Seymour Hoffman, Joaquin Phoenix and Amy Adams. Rami also notably appeared in the HBO miniseries The Pacific as ‘Snafu.’ His performance garnered incredible reviews and led to him being cast by Tom Hanks in Larry Crowne at Universal and Bill Condon in the last installment of Twilight: Breaking Dawn. Prior to that, Rami worked in Night at the Museum 1 & 2 and had a memorable arc on 24. Rami can be seen in Spike Lee’s Old Boy opposite Josh Brolin and Elizabeth Olsen, as well as Short Term 12, directed by Destin Cretton. He also starred in the Dreamworks feature, Need for Speed directed by Scott Waugh, in which he portrays a car expert whose motivations hinge upon his sense of loyalty and justice. Rami also appeared in Ain’t Them Bodies Saints, which was directed by David Lowery and stars Casey Affleck and Rooney Mara.

An Evening with Rami Malek