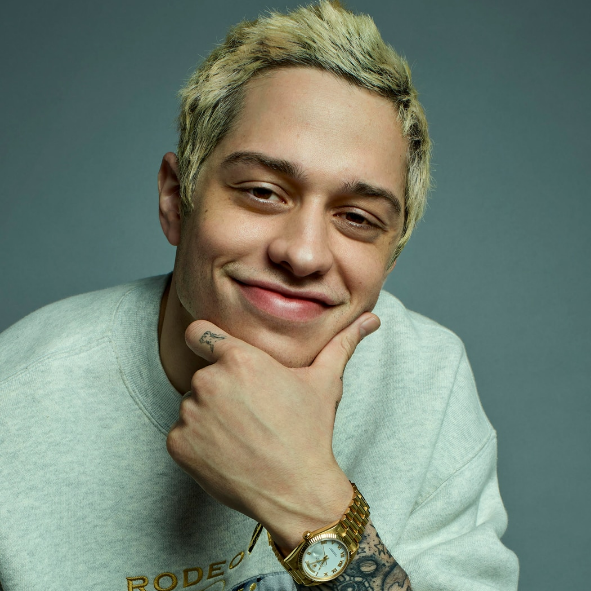 Pete Davidson is a comedian and actor. He is a cast member on Saturday Night Live.

Pete Davidson is a comedian and actor. He is a cast member on Saturday Night Live. Davidson has also appeared on the MTV shows Guy Code, Wild ‘n Out, and Failosophy. He has performed stand-up comedy on Adam DeVine’s House Party, Jimmy Kimmel Live!, and Comedy Underground with Dave Attell, and guest-starred in Brooklyn Nine-Nine.

Davidson’s earliest onscreen appearance was in the third episode of the MTV comedy series Failosophy, which premiered February 28, 2013. The following month, he appeared in “PDA and Moms,” a third-season episode of the MTV2 reality TV comedy series Guy Code, the first of four episodes in which he was featured. That June, his first televised standup aired as part of a second-season episode of the Comedy Central program Gotham Comedy Live, which showcases standup comedians at the Gotham Comedy Club in New York City. The following month, he returned to MTV2 with an appearance on Nick Cannon Presents: Wild ‘N Out, his first of six episode appearances on that show. In 2014, he acquired a role in a Fox comedy pilot, Sober Companion, but it ultimately did not make it to series.

Davidson joined the cast of Saturday Night Live with that show’s 40th-season premiere, which debuted on September 27, 2014. At age 20, he was the first SNL cast member to be born in the 1990s, and one of the youngest cast members ever. The first new addition to the cast that season, Davidson was given a chance to audition for the show through regular Bill Hader, whom he had met while filming a small part in the 2015 Judd Apatow feature film comedy Trainwreck. Hader subsequently told producer Lorne Michaels about him. In March 2015, Davidson was a roaster on the Comedy Central Roast of Justin Bieber, and his set was praised as one of the best of the show.

In 2016, Davidson was on the Forbes 30 under 30 list. Also in 2016, Davidson recorded his first stand-up special Pete Davidson: SMD. The Comedy Central special was filmed in New York City. He made an appearance on The Jim Gaffigan Show.

An Evening With Pete Davidson