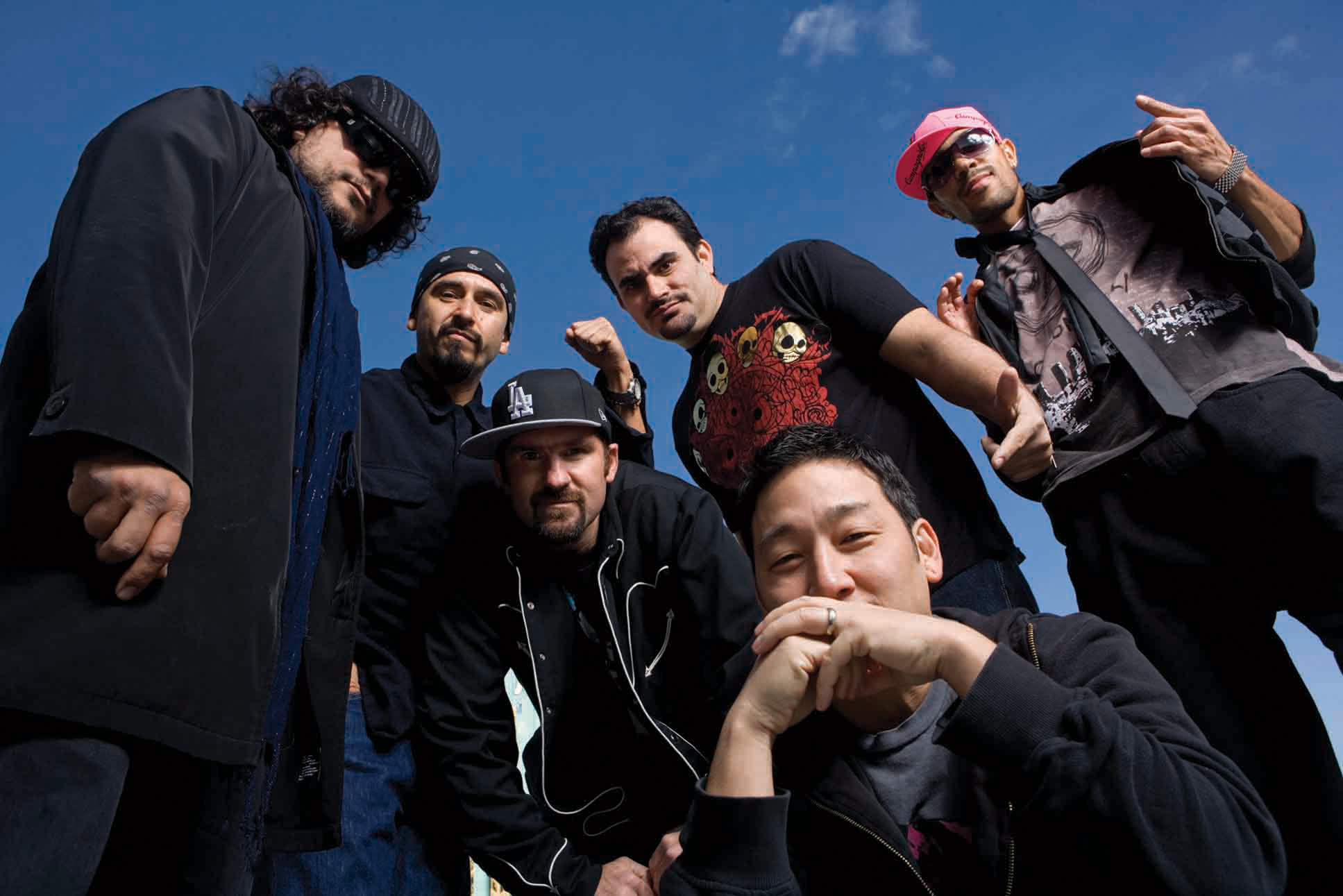 Ozomatli take their name from the Nahuatl word from the astrological symbol of the monkey, taken from the Aztec calendar. Ozomatli is also a god of dance, fire, the new harvest, and music. In 1995, all the members met while attempting to form a workers union within Los Angeles. Though they were not able to…

Ozomatli take their name from the Nahuatl word from the astrological symbol of the monkey, taken from the Aztec calendar. Ozomatli is also a god of dance, fire, the new harvest, and music. In 1995, all the members met while attempting to form a workers union within Los Angeles. Though they were not able to win recognition, they were given an abandoned building for one month. The building turned into a cultural arts center, and within it Ozomatli was born.

The band’s first album, Ozomatli, was released on June 16, 1998 on Almo Sounds. The album reached mainstream success following an appearance on the late night talk show Vibe! featuring MC Chali 2na, turntablist Cut Chemist, drummer William Marrufo, and saxophone player Jose Espinoza, the album reached No. 7 on the Billboard Latin Albums chart (71 weeks) and No. 4 on the Billboard Latin Pop Albums chart (50 weeks). Two singles released from the album were “Cut Chemist Suite” and “Super Bowl Sundae”. In 1999, Ozomatli joined Mana and Carlos Santana on tour following Santana’s release of Supernatural, and in 2002, the band appeared on “One of These Days”, the penultimate track on the latter’s album Shaman.

Ozomatli’s second album, Embrace the Chaos, was released on the inauspicious date of September 11, 2001. Although many American bands cancelled their concerts, Ozomatli gained some recognition for continuing to play their concerts, all the while continuing their commitment to social justice and progressive politics, in addition to the rising anti-war movement. In 2002, Embrace the Chaos won a Grammy for the Best Latin Rock/Alternative Album.

In 2003, Ozomatli released a six-song EP through Concord Records, featuring the rap vocals of Kanetic Source on “Cumbia De Los Muertos” and a collaboration with The Kumbia Kings on “Mi Gente.” In 2004, Street Signs was released under Concord Records. In 2001, the album won the Grammy for “Best Latin Rock/Alternative Album2005, The album also won the Latin Grammy Award for Best Alternative Music Album in 2005.

In 2005, Ozomatli released their live album Live at the Fillmore, recorded at The Fillmore in San Francisco.

In late 2006, shortly before the release of Don’t Mess With the Dragon, DJ Spinobi left the band to pursue personal projects (but stuck around until the album’s release, as he appears in the photos and is credited as a member). This was the end of the longest lasting Ozomatli lineup, and the first of many lineup changes that would occur over the next year and a half. April 3, 2007, saw the release of their fourth studio album Don’t Mess With The Dragon, which was co-produced by K. C. Porter. Their 2007 genre-crossing album, Don’t Mess with the Dragon, released by Concord Records, was written at a local Los Angeles Latino art gallery, Tropico de Nopal. The album includes songs such as “After Party”, which pays homage to old-school Chicano R&B, “When I Close My Eyes,” which nods back to Fishbone and Oingo Boingo, “La Segunda Mano,” which features the vocals of Quetzal’s Martha Gonzales blending son jarocho with hip-hop, “City of Angels,” which celebrates the city of Los Angeles, and “Temperatura,” which was inspired by the May 2006 pro-immigration marches. On September 20, 2007, Ozomatli announced that MC Jabu was leaving the group on amicable terms.

In 2006, Ozomatli were invited by the U.S. State Department to serve as official Cultural Ambassadors on a series of government-sponsored international tours. The band has since traveled to Asia, Africa, South America, the Middle East, Tunisia, India, Jordan, Nepal, Myanmar, Vietnam, Thailand, and China.

In early 2008, the group did a song for the Los Angeles Dodgers called “Can’t Stop The Blue,” their first recording with Tre Hardson. In the video, LA drummer Chris Cano is seen in place of Calire. Shortly thereafter, Sheffer Bruton and Tre Hardson were no longer seen playing with the group, and Mario Calire appeared to be back on the drumseat. In the summer of 2008, Ozomatli announced Chali 2na would be joining them for their Fall 2008 tour. Later that year, group members Wil-dog and Justin contributed their voices to the Konami music game Dance Dance Revolution X as in-game announcers.

Ozomatli made an appearance at TEDxSF – the first musical talk ever given at any TED conference – mixing discussion and sound to explore the challenges and promises of musical identities in a global age. Ozomatli has also been involved in composing and scoring and contributing music to Happy Feet 2 and Elmo’s Musical Monsterpiece for Warner Brothers Interactive, SIMS for EA Games, music for PBS Kids, the films A Better Life and Harlistas, and for the TV Show Standup Revolution on Comedy Central.

The past few years the band has focused on Ozomatli Presents Ozokidz, a special family-friendly set geared towards performing for children and adults alike. The album was released on Hornblow Recordings in September 2012.

The next record was “Place in the Sun” released in 2014, and featuring Dave Stewart’s production and co-writing, released on Vanguard. Jiro Yamaguchi took over the drum seat and the band is now six. They celebrate their 20th anniversary as a performing band in 2015 with most members being in the band since the early days. They are currently working on an album of songs that have been a big part of the Latino community’s heritage, culling from Selena, Cafe Tacuba, Mana, and may others. The songs are approached Reggae style and the project is being produced by Reggae legends, Sly and Robbie and will be released in the first quarter of 2016. They are on tour year round.

An Evening With Ozomatli