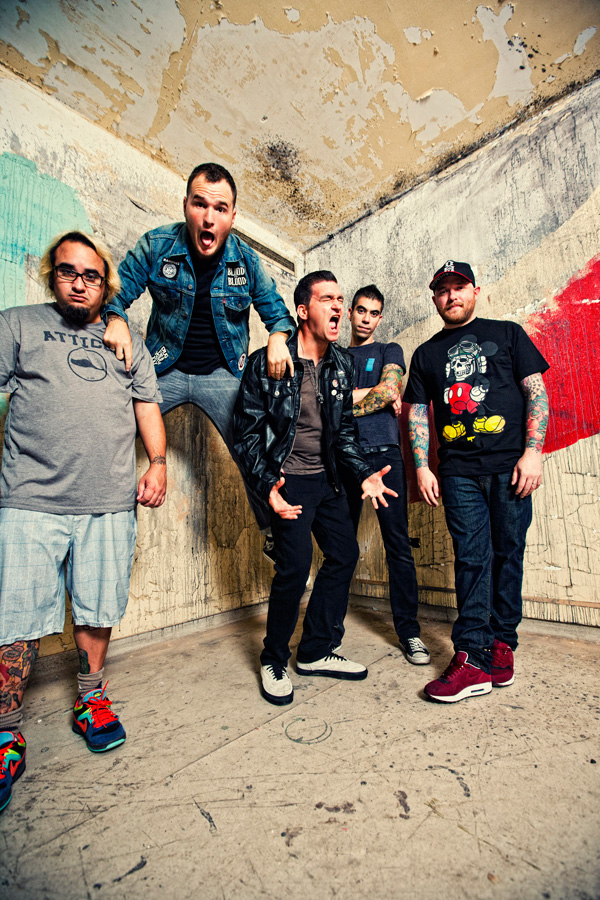 New found energy, new found purpose: that’s what Not Without A Fight is all about. The first New Found Glory album to bear the Epitaph logo brims with fresh promise, showcasing a band comfortable in their own skin and eager to get back to basics and present it all to the world. Not Without A…

New found energy, new found purpose: that’s what Not Without A Fight is all about. The first New Found Glory album to bear the Epitaph logo brims with fresh promise, showcasing a band comfortable in their own skin and eager to get back to basics and present it all to the world. Not Without A Fight is arguably the strongest addition to an impressive catalog with no less than three gold records and some of the most memorable songs of the past decade.

Album opener “Right Where We Left Off” is an instant reminder of the keen self-awareness that endeared New Found Glory to millions of fans worldwide in the first place. And naming their album Not Without A Fight? That’s a nod to that other side of the group Epitaph owner Brett Gurewitz called “the greatest pop-punk band in history,” the side that is scrappy, that’s from the do-it-yourself scene. The side of a band who probably never should have been lumped in with some of the more teeny-bop friendly fare they’ve often shared the rock radio and TRL charts with.

Lead single “Listen to Your Friends” flips the script by rocking a verse even catchier than its chorus; “I’ll Never Love Again” boasts a killer singalong. “47” has a hooky scream that breaks new ground for the Florida-bred five-some while “Truck Stop Blues” summons the potent urgency of the burgeoning scene that New Found Glory arose from, recalling a bygone era when they shared small stages with their friends in Get Up Kids, Piebald and Saves The Day.

Not Without A Fight packs together the best elements of fan favorite albums like Sticks and Stones (2002) and Catalyst (2004) with a reinvigorated drive making for a declaration that’s fresh and timely. There’s pop, there’s punk, there’s crunch, there’s those irrepressible melodies and Jordan Pundik’s instantly recognizable voice is in fine form. “Nobody in New Found Glory loves anything as much as this band,” says guitarist Chad Gilbert, by way of explanation as to how they have managed to maintain the same lineup – Pundik, Gilbert, Steven Klein (guitar), Ian Grushka (bass) and Cyrus Bolooki (drums) – for over ten years. “You fight with your mom. You don’t hang out with her all the time. But you love her! You’re never going to hate her. We’re family. It might sound cliche, but that’s what it is.”

That family first came together in Coral Springs, Florida in 1997. Nothing Gold Can Stay (1999) and New Found Glory (2000) became classics thanks to hard-touring and good natured relationship building the world over, which ensured the next two albums (Sticks and Stones and Catalyst) would both debut in the Top 5 on the Billboard 200 chart.

As happens all too often, the uber-successful and beloved band found themselves delivering Coming Home to a group of relative strangers who lacked the same investment in them as before. By 2006, many of the folks who worked with the band at the label had been replaced by new faces, from the president on down. “At major labels, people are always losing their jobs,” Gilbert points out. “Someone can love your band one week and the next week that person is fired.”

With their recording contract fulfilled, New Found Glory seized the opportunity to have some fun while weighing their options, releasing From the Screen to Your Stereo Part II (something their most ardent supporters had demanded for years) and a split EP with their alter-ego, International Superheroes Of Hardcore. “It brought this different attention to our band that we hadn’t had in a while,” Gilbert says. “Through the major label years, some of those lines got blurred because of some of the things the label did representing our band. With the release on Bridge 9 Records, we were able to do things how we wanted to do them. It was awesome.”

In the midst of all of this, the band continued to write their next album, which they ultimately decided to record before choosing a new label. That’s where +44 / Blink 182’s Mark Hoppus came in, agreeing to produce Not Without A Fight at the studio he co-owns with Travis Barker. “He’s an old friend of ours,” Gilbert explains. “We had no money to make the record so we wanted someone with the confidence to do the album for free and get reimbursed later.”

Eventually, of course, the label situation needed sorted out, as the guys in New Found Glory have no desire to be in any kind of “business” other than the business of writing great songs, recording them and playing them live.

“When we announced that we were no longer signed to Geffen two years ago, Brett Gurewitz was the first one to call me,” Gilbert remembers. “‘People at Epitaph are all music fans and have their shit together.”

And as for that spectacular accolade from the man running their new record label home? “It’s crazy!” Chad says, laughing. “The Descendents could take that crown way before we could, or Screeching Weasel, or Green Day. I don’t know why he said that! He’s crazy. It’s flattering. It’s really flattering. But I don’t know what to say!”

New Found Glory’s first Epitaph album has no guest appearances, no frills, nothing but fantastic songs and powerful performances. “If you really listen to our music, you can’t pigeonhole it. We play music that we love.”

Not Without A Fight is alternately the band’s most streamlined and direct but powerful and broad album thus far. “

New Found Glory is back to where we want it to be: we tour, we play music and it’s from the heart.”

An Evening With New Found Glory