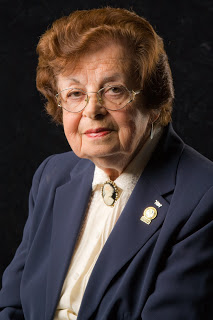 Holocaust survivor. She has dedicated her adult life to teaching and sharing memories of the Holocaust

Nesse Godin is a survivor of the Shauliai, Lithuania Ghetto, the Stutthof Concentration Camp, four labor camps and a death march. She has dedicated her adult life to teaching and sharing memories of the holocaust. Nesse has the ability to translate the Holocaust into a personal glimpse of this enormous and horrifying drama. She has…

Nesse Godin is a survivor of the Shauliai, Lithuania Ghetto, the Stutthof Concentration Camp, four labor camps and a death march. She has dedicated her adult life to teaching and sharing memories of the holocaust. Nesse has the ability to translate the Holocaust into a personal glimpse of this enormous and horrifying drama.

She has appeared before a variety of audiences including the Naval Academy,West Point Military Academy, the department of Defense, the Department of Energy, numerous Schools, Churches, Synagogues, Civic groups and Teacher’s Conferences. The United States Holocaust Memorial Museum is fortunate to have Nesse Godin as a member of the Speaker’ bureau.

Nesse is Co-President of the Jewish Holocaust Survivors and Friends of Greater Washington. She is also on the Board of Directors and Founding Member of several Holocaust Survivor groups. Nesse served on the Board of Jewish Federation of Greater Washington. Is a board of the Anti-Defamation League, The Jewish community Council and many other worthy Organizations. She participated as a speaker for the Capitol Children’s Museum of Washington, D.C.

Numerous awards and honors have been given to Nesse including the “Myrtle Wreath” by the Hadassah Council and the Chaim Solomon Freedom Medal by B’nai B’rith Argo Lodge. She has also received the Woman of Valor Award by three different organizations- B’nai B’rith Women, Naamat USA, and Amit Women Birah Chapter.

A Conversation With Nesse Godin