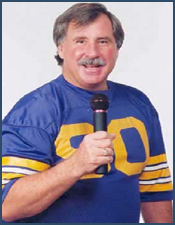 Drug and Alcohol Awareness and Educator

Over the past 18 years, Mike Green has presented on more than 2000 campuses nationwide in his effort to make drug and alcohol awareness and education an integral part of every student’s life. He is a recognized leader in the field, who has earned the respect of both his colleagues and the student he has…

Over the past 18 years, Mike Green has presented on more than 2000 campuses nationwide in his effort to make drug and alcohol awareness and education an integral part of every student’s life. He is a recognized leader in the field, who has earned the respect of both his colleagues and the student he has counseled. This recognition was clearly illustrated in 1987, when he was chosen to give expert testimony before the United States House of Representatives Select Committee on Narcotics Abuse and Control.

He is listed among the Outstanding Young Men of America and was recently added to the ranks of West Chester University’s Distinguished Alumni. At the request of Senator Bill Bradley, Mike developed drug and alcohol programs for the New Jersey High Schools. In the non-academic setting, he produced programs for the medical societies of both New Jersey and Virginia, and for professional sports teams including the Philadelphia Flyers. Mike has appeared as a featured guest on various television programs including A.M. Philadelphia and People are Talking, as well as having had interviews published in The Chronical of Higher Education, Coach, Athletic, Management, Scolastic Coach, and hundreds of campus papers.

He produced a series of video tapes which include many of the innovative, and now famous, Think before you drink techniques as demonstrated during actual presentations.

Mike has been participant and coach on both High School and College levels. As a defensive lineman, he received All Pennsylvania Conference and All State Honors, and a try-out with the Philadelphia Eagles.

Mike was a High School athletic director, and has coached Division II Football at West Chester University. His background of athlete, coach, and educator, gives him the know-how to connect to today’s youth. His firsthand experiences as a recovering alcoholic gives him the credibilty to honestly relate the dangers drugs and alcohol pose for many students.

He has made it his life’s work to help young people avoid the perils of abuse, and because Mike Green is an inspiring and dynamic speaker, kids not only sit up and listen – they buy what he is selling!

Mike earned his Masters of Education Degree at West Chester University for Health and Physical Education.

Mike Green Talks About Alcohol and Hazing Talk
Mike strives to educate your students about the effects of drugs and alcohol consumption on campus. We will not frighten, moralize, or preach. We will simply offer accurate information about the mental and physical damage substance abuse can cause. We believe that because drug and alcohol use and abuse is a reality on every campus, the actual challenges that students must face involve recognizing personal accountability and making responsible decisions.We will educate and assist your students by drawing on our collective knowledge, coupled with our years of experience as educators, coaches, and counselors. Our methods are interactive and often entertaining – but our message is deadly serious. Our purpose is always the same – the health and overall well-being of the student.

Mike Green’s presentation to our athletes on the abuse of alcohol and its consequences was most effective and made a positive impression on our squad.

Mike, Spring Break is over and everyone survived. Thank you so much for your great presentation, before spring break. You really made a connection with our students. Greenys Advice was well taken and we thank you.

I saw your presentation last night at my campus and I thought you were great. You caught ppls attention & really got people to be aware hey, even one time of being out of control can be trouble. I just wanted to say thanks.

Thank you so much for coming and speaking to us. You definitely provided a different look at how to deal with alcohol. What you had to say made me help a friend get help with their drinking problem. Thank you a hundred times.

Mike Green was great! The students loved his message. Thank you, PDA for all your help.