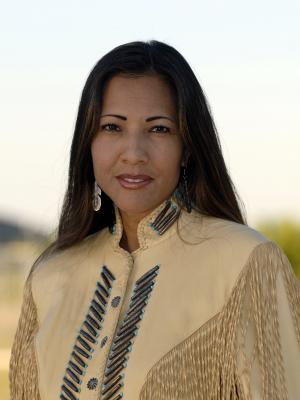 Mary Kim Titla is a member of the San Carlos Apache Nation located in southeastern Arizona. Ms. Titla is a Native American youth advocate, former TV broadcaster and a former school administrator. A 20-year veteran TV News Reporter, she spent most of her career working for NBC affiliate stations in Arizona. In 2007 she was…

Mary Kim Titla is a member of the San Carlos Apache Nation located in southeastern Arizona. Ms. Titla is a Native American youth advocate, former TV broadcaster and a former school administrator. A 20-year veteran TV News Reporter, she spent most of her career working for NBC affiliate stations in Arizona. In 2007 she was inducted into the Cronkite Hall of Fame at Arizona State University. She estimates telling as many as 5,000 stories during her career and has received awards from the Associated Press, Arizona Press Club and the Native American Journalists Association. Currently, she serves as Executive Director for UNITY, a national non-profit organization promoting youth leadership, citizenship and personal development among Native American youth.

A Evening With Mary Kim Titla
Strengthening Our Nations and Culture and focus of actively working together to strengthen our Sovereign Nations, tribal communities, and our culture