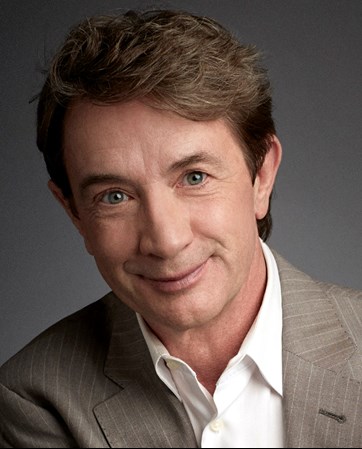 Martin Short, a celebrated comedian and actor, has won fans and accolades in television, film and theater since his breakout season on Saturday Night Live almost 30 years ago and recently returned to SNL to host their Christmas special on Dec 15, 2012.

Short won his first Emmy in 1982 while working on Canada’s SCTV Comedy Network, which brought him to the attention of the producers of Saturday Night Live. He became a fan-favorite for his portrayal of characters such as Ed Grimley, lawyer Nathan Thurm and “legendary songwriter” Irving Cohen.

His popularity and exposure on Saturday Night Live led Short to cross over quickly into feature films. He made his debut in Three Amigos and followed with Inner Space, Three Fugitives, Clifford, Pure Luck and Tim Burton’s Mars Attacks. One of Short’s most memorable roles was in the remake of Father of the Bride, as Franck the wedding planner, a role he reprised a few years later in Father of the Bride Part II. Short is featured in the animated film Madagascar 3 and the Tim Burton film Frankenweenie.

An accomplished stage actor, Short won a Tony and an Outer Critics Circle Award for his role in the revival of Little Me. He was also nominated for a Tony and took home an Outer Critics Circle Award for the musical version of Neil Simon’s The Goodbye Girl. Short co-wrote and starred in Fame Becomes Me, prompting The New York Times to describe Short as “a natural for live musicals, a limber singer and dancer who exudes a fiery energy that makes you want to reach for your sunglasses.”

Short returned to television in an Emmy-nominated role for the mini-series Merlin and host of The Martin Short Show, which garnered him seven Emmy nominations. Short also wrote, produced and starred in three comedy specials, winning two Cable ACE awards and an Emmy. In 2001, he launched the critically acclaimed Primetime Glick, garnering another five Emmy nominations. Short was nominated for his nineteenth Emmy award in 2010 for his work as the lawyer Leonard Winstone on the critically acclaimed FX series Damages.

Short can be seen starring in the new FOX series Mulaney, which premiered Fall of 2014. He was also recently seen on the CBS hit comedy seriesHow I Met Your Mother in the recurring role of Garrison Cootes. His voice can be heard as the Cat in the critically acclaimed PBS series Cat in the Hat Knows a Lot about That.

Short’s much anticipated memoir titled I Must Say was released on November 4th, 2014 through HarperCollins Publishing.

From January 4th, 2015 through the end of March, 2015, Short took over Nathan Lane’s role in the immensely successful hit It’s Only a Play on Broadway.

In 1994, Short was awarded the Order of Canada, the Canadian equivalent to British Knighthood. He was also inducted into the Canadian Walk of Fame in June 2000.

An Evening With Martin Short