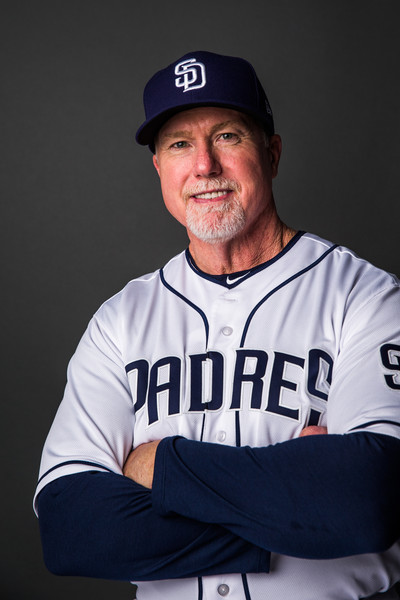 Known as “Big Mac,” Mark McGwire will forever be known as the man who broke baseball’s prestigious home run record. When he slugged 70 home runs in 1998, this Cardinals’ first baseman not only surpassed the old mark of 61 set by Roger Maris but he also electrified a baseball nation that was riveted by…

Known as “Big Mac,” Mark McGwire will forever be known as the man who broke baseball’s prestigious home run record. When he slugged 70 home runs in 1998, this Cardinals’ first baseman not only surpassed the old mark of 61 set by Roger Maris but he also electrified a baseball nation that was riveted by every one of his at-bats. Bathrooms and concession stands are lonely places when Mark strides to the plate. He not only hits home runs at a greater rate than anyone in history, but he hits them unfathomable distances.

Mark followed up the magical season in which he was the Players’ Choice for Outstanding Player by slamming 65 homers in 1999 – the fourth consecutive season (and fifth overall) that he led the Major Leagues in big flies. In 2000, he was hampered by knee problems, but still hit 32 homers in just 89 games to move into seventh place on the all-time list with 554. Mark is a very patient hitter (he walked an NL-record 162 times in 1998) who can drive the ball to all fields, although he hits most of his home runs to left. He has a huge strike zone, but will rarely chase bad pitches.

A member of the 1984 U.S. Olympic baseball team, Mark played college ball at the University of Southern California and made his major-league debut with the Oakland Athletics in 1986. The following year, he tied for the major league lead with 49 home runs and was named the American League’s Rookie of the Year. In 1997, he was traded from Oakland to St. Louis, where he was reunited with Manager Tony La Russa, his former skipper with the A’s.

Mark is also a big man away from the field. Through the Mark McGwire Foundation for Children, he contributes $1 million annually to agencies that work with child abuse victims in St. Louis and Southern California. His fellow players recognized his off-the-field efforts by naming him Man of the Year at the 1997 Players’ Choice Awards.

A Conversation With Mark McGwire