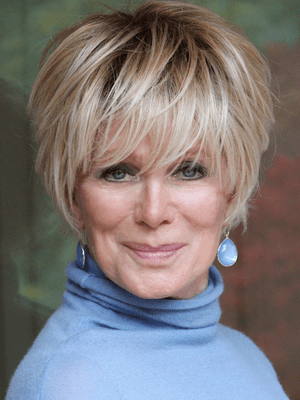 Actress Linda Evans has personified beauty and grace to American television viewers for over five decades, from her role as Audra Barkley, a daughter of the Old West on The Big Valley (1965-1969 on ABC) to the glamorous Krystle Carrington on Dynasty (1981-1989 on ABC) to Hell’s Kitchen, the British competitive cooking reality show she…

Actress Linda Evans has personified beauty and grace to American television viewers for over five decades, from her role as Audra Barkley, a daughter of the Old West on The Big Valley (1965-1969 on ABC) to the glamorous Krystle Carrington on Dynasty (1981-1989 on ABC) to Hell’s Kitchen, the British competitive cooking reality show she won in 2009.

Linda became one of the most celebrated female television stars of the 1980s. For her role as Krystle, wife of an oil multimillionaire played by John Forsythe and good girl counterpart to Joan Collins’ evil Alexis, Linda was nominated five times for the Golden Globe Award for Best Actress in a TV Drama series (every year from 1982 to 1986). She won in 1982, sharing the honor with Barbara Bel Geddes of rival prime time television soap opera Dallas. Linda won five People’s Choice Awards as Favorite Actress in a Drama Series in 1982, 1983, 1984, 1985, and 1986, and was nominated for an Emmy Award for Outstanding Lead actress in a Drama Series in 1983. For her contribution to the television industry, Linda has a star on the Hollywood Walk of Fame at 6834 Hollywood Blvd.

Linda was born on November 18, 1942, as Linda Evenstad in Hartford, Connecticut, the second of three daughters to parents who were professional dancers. When Linda was six months old, her family moved to Hollywood.

At age 14, Linda was encouraged to take drama classes to overcome her shyness. At 15, she joined a friend who was auditioning for a television commercial. Linda got the part.

A short time later, Linda earned her first guest-starring role on a major television series, Bachelor Father, starring John Forsythe, whose career would become eternally tied to Linda when they portrayed the powerful Carringtons on Dynasty. She went on to guest-star on The Adventures of Ozzie and Harriet, Wagon Train, My Favorite Martian and other staples of the 1960s before landing the role of Audra, daughter of Big Valley matriarch Victoria Barkley, played by Barbara Stanwyck.

Between her Audra years and her portrayal of Krystle, Linda was rarely off the airwaves, guest starring on shows that ranged from McCloud to The Rockford Files, from the miniseries North and South to the prime time drama Hunter, co-starring Linda as secret agent Marty Shaw.

After Dynasty, Linda decided there was something more to life than Hollywood and moved to the Pacific Northwest, where she began an extraordinary journey of self-discovery with a teacher named Ramtha.

But she returned to performing frequently, starring in the stage play, Legends, and winning the Hell’s Kitchen competition while working under Michelin-starred chef Marco Pierre White.

Linda’s often lavish and luxurious life has rivaled Krystle Carrington’s. She has dined with queens and presidents, been romanced by the rich and famous, and today, what Linda treasures most is the wisdom she has gained along the way.

Aging Gracefully – Living your best life and life lessons:
Linda Evans eloquently shares her personal wisdom in this keynote. Using her own life experiences, Linda uses compelling stories to captivate the heart and mind of her audience bringing insight, hope healing and inspiration in a culture that does not revere aging.

Women Overcoming – The power of choice and personal command:
Linda understands a woman’s journey and openly shares about her own path in overcoming fears and insecurities. Linda compels listeners as she weaves together a keynote that will challenge, inspire and motivate listeners to continue on their own journey to empowerment.

Linda Evans on "The View" 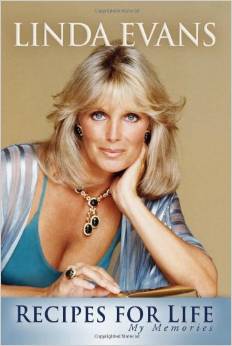 Recipes for Life: My Memories

Linda was AMAZING! Not only was her speech wonderful and heartfelt, she was a doll to work with. Kind, sincere, genuine, accommodating and friendly. To sum it up, she was truly special and we loved having her as part of our event.