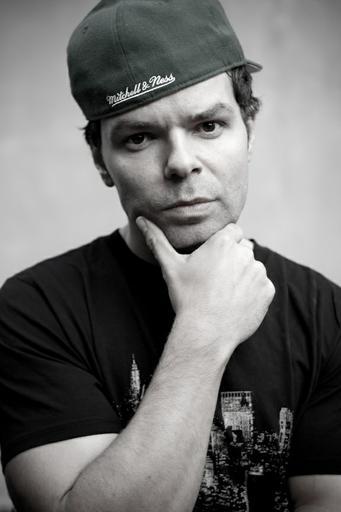 Over the past decade, he has performed in venues across the country, from New York’s Nuyorican Poets Café to Hollywood’s Kodak Theater. He has appeared in four Spike Lee films and was the subject of the documentary Lemon, a look at his journey from two-time felon to bold-faced name — and how leaving one’s past behind just isn’t that simple.

Most recently, Spike Lee produced Andersen’s one-man play County of Kings at The Public Theater in New York City. Since its premiere in 2009, the play has been staged on three continents, to rave reviews. The script was awarded the New York Book Festival’s Grand Prize.

Anderson’s newest work, ToasT, was commissioned by the Sundance Institute and was at The Public Theater in 2013.

Creating for Ethnic Minorities
As a playwright, speaker Lemon Andersen delves into various cultural backgrounds to create characters his audiences may not necessarily be familiar with. In his play “ToasT,” for instance, he breathes life into the fabled “Dolomite” by giving him the language of 1971 “blaxploitation,” thereby creating a strong black character even though Andersen himself is not African American.

Speaking to campuses and associations around the country, Andersen employs the vernacular of different ethnic minorities to introduce students and other groups to these different voices and perspectives. He then provides insight on how to write – and create – these different voices in order to generate pertinent dialogue on diversity in America.

The New Latino
As past elections have all too clearly shown, Latinos in the US have become a prized commodity. Politicians on either end of the spectrum lump Hispanics together in a single category to obtain their votes; but by doing so, they fail to recognize the vast differences that exist among various Latino groups. Hispanics from the Dominican Republic, for instance, have a drastically different history and culture than Chicanos from Mexico and partake in different sociopolitical conversations.

In this presentation, speaker Lemon Andersen discusses the cultural differences and common threads among various groups of Latinos in the US as a representative of the “new Latino,” which he defines as an American of Hispanic origin who no longer speaks Spanish and struggles with his or her identity as a Hispanic American. As a powerful voice in the theatre, Andersen uses art to help new Latinos – whether of Caribbean or Mexican descent – carve an identity for themselves in the US.

Lemon: Breaking in the Door to Have Your Voice Heard
To speaker Lemon Andersen, poetry is a weapon he wields to bring his audience to the theatre. In this presentation, he shares his struggle in finding his way to the stage – from growing up with parents addicted to heroin to becoming a three-time felon to winning a Tony Award for his work with “Def Poetry Jam.”

He will present the documentary Lemon, a feature-length film that follows his desperate battle to move into a brighter future while asking the question, “can any of us really escape the past?” Andersen inspires his audience to find their voice and let it be heard.

Spoken Word & Branding
Ever since Wieden+Kennedy enlisted him to create an original poem encapsulating their vision for LeBron James and Nike Basketball, speaker Lemon Andersen has produced unique work for brands, from products to people. In a campaign backed by Boost Mobile for the 2011 NBA playoffs, he penned an original piece centering on Carmelo Anthony’s blockbuster trade to the New York Knicks. His creative writing formed the campaign’s backbone and Spike Lee directed Carmelo in a commercial spot featuring Andersen’s writing and voiceover.

In this presentation, speaker Lemon Andersen shares how he adapts spoken word to his brand work to share a distinct cultural perspective.

Mr. Andersen has a distinctive talent that makes words sing in ways that insist you listen. But it’s the drive that makes him glow. ‘Watch me,’ he demands, in the first sentence of County of Kings. He guarantees that you do.