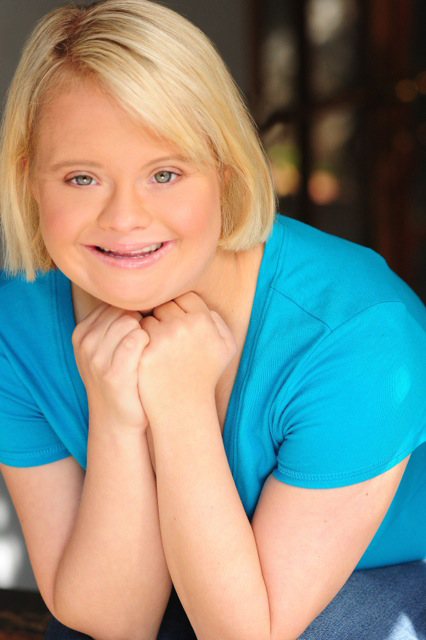 Actress, Most Well Known for her Role as Becky in "Glee"; In November 2011, President Barack Obama appointed Potter to the President's Committee for People with Intellectual Disabilities

An inspiration to all, Lauren Potter has proven herself a young woman of strength and character. She’s overcome bullying and the challenges of living with a disability, and is currently on her 5th season on the TV show GLEE. When professionals told Lauren she ‘couldn’t’ or ‘wouldn’t,’ she worked harder – sometimes to the point…

An inspiration to all, Lauren Potter has proven herself a young woman of strength and character. She’s overcome bullying and the challenges of living with a disability, and is currently on her 5th season on the TV show GLEE.

When professionals told Lauren she ‘couldn’t’ or ‘wouldn’t,’ she worked harder – sometimes to the point of exhaustion. Barriers and limitations put before her became a personal challenge to let people know she is worthy of high ideals and capable of great expectations.

Lauren danced before she could walk. She began dance classes at the age of three, and has been dancing ever since. She made her first acting debut in the movie “Mr. Blue Sky”, playing the part of young Andra Little. Her acting skills impressed the producers of Glee enough that they offered her a part on the hit FOX television program. Now in her fourth season with Glee, playing the part of Becky Jackson continues to open doors for Lauren, and she hopes those doors will open wider still! In 2012 Lauren was nominated for a SAG Award for her work in the Ensemble In A Comedy Series category for her work on GLEE. She was also honored with the SAG/AFTRA Harold Russell Award at the 2012 Media Access Awards.

Lauren is thrilled to be using the public “voice” that Glee has given her to speak out for other people with disabilities who may not have the same opportunities. She was recently appointed to the President’s Committee for People with Intellectual Disabilities, she is on the International Board of Best Buddies, she has participated in the Ablilitypath.org campaign against bullying, which included a PSA, she worked with Special Olympics in their “End the Word” campaign, is lending her name and fame to numerous organizations, including the Wylie Center, the Arc, the Down Syndrome Association in the U.S. and Canada, the Down Syndrome Congress, the AAPD, and many others. She feels honored to have received awards for her inclusion and diversity from the Arc, The Down Syndrome Association of Los Angeles, and the Full Life Festival, as well as accommodations from local and California State politicians.

Lauren has both benefitted from and is committed to a simple ideal: that she shares in the rights and privileges of all citizens and has much to offer. By simple extension, she believes these rights extend to all people.

We are pleased to present Lauren for speaking engagements, personal appearances, as an event emcee and more. As a speaker, Lauren will tell her story, share her challenges and success, tell anecdotes from her work in Hollywood, and host a Q&A and meet & greet. For personal appearances or to emcee an event, Lauren brings her great attitude and fun personality. She’s hip, she’s cool and she’s inspirational.

Lauren will tell her story, share her challenges and success, tell anecdotes from her work in Hollywood, and host a Q&A and meet & greet. Lauren brings her great attitude and fun personality. She’s hip, she’s cool and she’s inspirational.

GLEE'S LAUREN POTTER REFUSES TO BE A VICTIM OF BULLYING