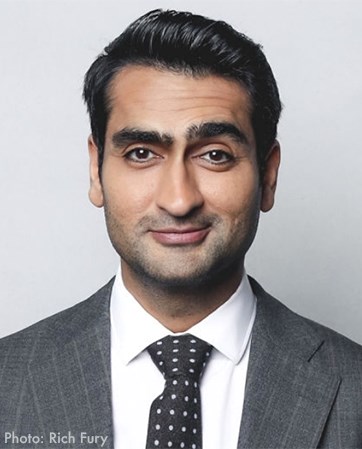 Kumail Nanjiani is an Oscar-nominated writer and critically acclaimed actor and comedian.

Kumail Nanjiani is an Oscar-nominated writer and critically acclaimed actor and comedian.

Nanjiani was recently seen alongside Issa Rae in the romantic comedy, THE LOVEBIRDS, released on Netflix, and coming-up in the highly anticipated Marvel film, THE ETERNALS, alongside Angelina Jolie releasing in 2021. Additionally, it was recently announced that he will star in the political thriller, THE INDEPENDENT. Previously, Nanjiani starred in and wrote THE BIG SICK, which was nominated for an Oscar for Original Screenplay.

On the television side, Nanjiani and his wife, Emily V. Gordon, currently serve as executive producers on the Apple TV+ series “Little America,” which was renewed for a second season ahead of its series debut which released on January 17, 2020. Nanjiani also reprised his starring role as ‘Dinesh’ on the sixth and final season of the Emmy Award-winning HBO comedy series “Silicon Valley.”

Most recently, Nanjiani and Gordon created the podcast, “Staying In with Emily and Kumail,” while in quarantine. “Staying In” donated all proceeds to charities helping those affected by COVID-19.

An Evening With Kumail Nanjiani