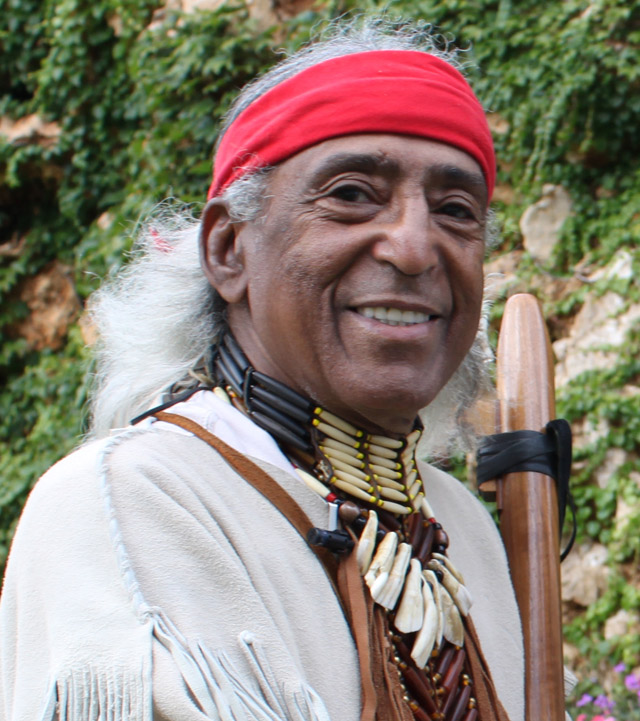 Kenneth Little Hawk is a Native American storyteller, keynote speaker, recording artist and actor, descending from the Micmac and Mohawk tribes. In 1998, he was a guest of the President and performed at the White House for a special screening of the PBS film,”Lewis & Clark.” He is a Native American cultural treasure. Touring throughout…

In 1998, he was a guest of the President and performed at the White House for a special screening of the PBS film,”Lewis & Clark.” He is a Native American cultural treasure.

Touring throughout America over the past 20 years, Little Hawk has performed for over 2 million people at many distinguished locations including Lincoln Center in New York, the Kennedy Center in Washington, and the American Museum of Natural History.

Little Hawk has been hired by corporations such as PepsiCo, AT&T, Verizon, and Sony, as well as, government organizations such as the EEOC (Equal Employment Opportunity Commission), the Federal Executive Board, and the U.S. Army.

His voice and authentic flute music can be heard in such award-winning PBS films as “The West” and “Lewis & Clark” produced by the acclaimed director, Ken Burns.

Little Hawk has been nominated twice for Best Storyteller of the Year by the Native American Music Awards for “Wind, Sun and Stars” and “In a Good Way.” In reviewing “Wind, Sun and Stars,” Fanfare Magazine reported, “The stories are fascinating and the presentation avoids condescension. It is polished but not slick. This CD rings true.” In respect to “In a Good Way,” “Excellent storytelling! Very animated and sound effects of the animals and nature made the stories come alive.”

An Evening With Kenneth Little Hawk