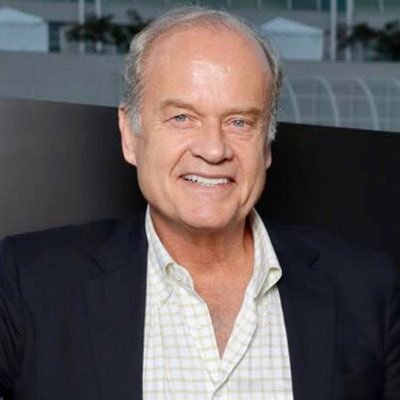 In an intimate fireside chat, Grammer brings his signature wit and charm to the stage. Whether talking about achieving his dreams of providing a behind-the-scenes look at some of his beloved roles, Grammer is sure to leave audiences entertained.

Kelsey Grammer has excelled at the highest levels in theatre, television, and film as an actor, producer and director. An initial role as Dr. Frasier Crane on Cheers developed into the cornerstone of the Juilliard-trained actor’s career.  Grammer played the celebrated character in three different television series (Cheers, Wings and Frasier) over a span of 20 years, tying the record for longest-running television character. Grammer has won six Emmys, three Golden Globes and a SAG Award and has received an unparalleled 18 Emmy nominations, eight Golden Globe nominations, 16 SAG nominations, and one Tony nomination. He can be seen currently on the hit FOX series, Proven Innocent.

Grammer performed on stage November—December 2017, making his London debut in a revised version of the Broadway musical Big Fish. He also joined the 2018 season of the L.A. Opera in a limited run of Leonard Bernstein’s operetta Candide, which ran January–February 2018, playing the dual role of Pangloss and Voltaire.  In May of 2018, he appeared at the Hollywood Bowl in Beauty and the Beast voicing Lumière alongside an all-star cast in a two night limited run with a live performance of Alan Menken’s music that will accompany the classic, animated Disney film.

In 2010,  Grammer earned a Tony nomination for Best Performance by a Leading Actor in a Musical, for his starring role in La Cage aux Folles on Broadway. In 2015 Grammer returned to the Broadway stage to star in Finding Neverland.  He reprised the role again in 2016.

Also accomplished as a voice-over artist, Grammer has played the iconic character Sideshow Bob on The Simpsons since 1990, for which he won an Emmy in 2006.  He has also lent his voice to the feature films Toy Story 2,  Anastasia and Teacher’s Pet, to the television series Father of the Bride and Gary the Rat, and to the Emmy-nominated Animal Farm for TNT.  He was also seen in Netflix’ 2018 release Like Father.

Films include Arclight Films’ live-action Guardians of the Tomb, Universal Pictures’Neighbors 2: Sorority Rising, Sony Picture Entertainment’s Baby, Baby, Baby and made a cameo appearance in Warner Home Video’s  Entourage movie.  In 2014, Grammer appeared in five films: Paramount’s fourth installment of the Transformers film series, Transformers: Age of Extinction, Twentieth Century Fox’ X-Men: Days of Future Past. Lionsgate’s The Expendables 3,  Screen Gems’ Think Like a Man Too and Millennium Entertainment’s Reach Me.  In spring 2014, he was also heard lending his voice to the iconic Tin Man in Legends of Oz: Dorothy’s Return, which was nominated for Best Feature at the 2013 Annecy International Animated Film Festival, prior to its 2014 release.

Additional television credits include the Amazon series The Last Tycoon, currently available for streaming, The National Geographic Channel’s historical drama miniseries Killing Jesus, FX Network’s comedic series Partners and Starz drama Boss,in which he starred and was executive producer, for which he was honored with his most recent Golden Globe Award for Best Actor in a Drama Series for his portrayal of Mayor Tom Kane.

Grammer created Grammnet NH Productions, a TV production company which has produced such hit television shows as the Emmy-winning Medium, for NBC, and The Game and Girlfriends, for CW. Other Grammnet producing credits include the NBC productions The Innocent, Kelsey Grammer Salutes Jack Benny, Fired Up, In-Laws and Gary the Rat. For PAX, he produced World Cup Comedy.  For FOX, he starred in and produced Kelsey Grammer Presents: The Sketch Show.

Grammer directed single episodes of Everybody Hates Chris, My Ex Life and Out of Practice. He has also directed several episodes of  Frasier, one of which earned him a DGA nomination. Grammer also starred and served as executive producer of the ABC comedy Hank.

Grammer began acting in plays at Pine Crest Preparatory School in Fort Lauderdale, where his teenage stage success inspired him to apply to Juilliard.  He developed an interest in Shakespeare and began his professional acting career at the Old Globe Theatre in San Diego. He continued in regional theatre, and finally made his way to New York with roles in the off-Broadway productions Sunday in the Park with George, A Month in the Country and the Obie Award-winning  Quartermaine’s Terms. He starred on Broadway in Macbeth and Othello. After gaining television notoriety, he returned to the stage and received critical acclaim as Professor Higgins in My Fair Lady. He also performed the title role in Richard II and Lucio in Measure for Measure at the Mark Taper Forum in Los Angeles.

Grammer then landed the role of Dr. Frasier Crane in Cheers. Originally, the show’s creators wanted John Lithgow for a brief recurring role, but the actor was unavailable. Grammer’s former Juilliard classmate Mandy Patinkin suggested him to the New York casting director and he got the job, parlaying six episodes into a career that would span decades.

Grammer was born at St. Thomas in the U.S. Virgin Islands and was raised in New Jersey and Florida.  He lives in the Los Angeles area and New York.

A Conversation With Kelsey Grammer

Kelsey Grammer Is Fine Being A Conservative In Hollywood