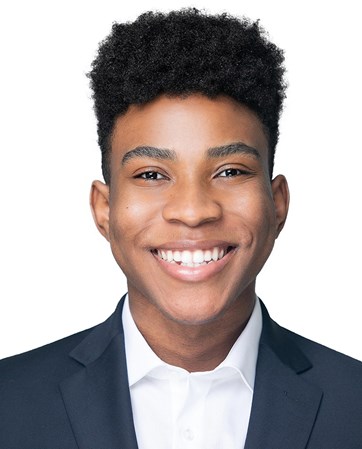 He has authored op-eds about organizational equity in the LA Times and Washington Post; and his article “Dear CEO’s: A Gen Zer’s Open Letter to His Future Employers” was published in the Harvard Business Review. As a junior in college, Greene completed a summer internship with McKinsey and Company and later earned a Hall of Fame designation from the Boys and Girls Clubs of Greater Washington for his fundraising and support of the nonprofit.

Prior to this, Kahlil Greene was elected the first Black student body president in Yale’s 318-year history. At the end of his year and a half-long term–which lasted through the COVID-19 pandemic–his administration’s successes included grassroots fundraising over $57,000 for racial justice organizations in one week; launching six affinity networks to increase racial, socioeconomic, and gender representation on the Council; and kickstarting a walk-in mental health counseling program for students. Greene stayed true to his campaign promises to be direct in critiques of Yale’s administration and actively supportive of student-led movements and protests–a hallmark of his presidency.

Today, Greene is also a New York Times featured social media influencer who is verified on Instagram and has over 440k followers and 12mm views on TikTok. Both Instagram and Facebook, Inc. have collaborated with and sponsored Greene’s work directly. He often engages in political discourse with social media influencers and users from all backgrounds, and now uses his influence to generate awareness around social issues as they arise in real-time.

DEI in the New Decade