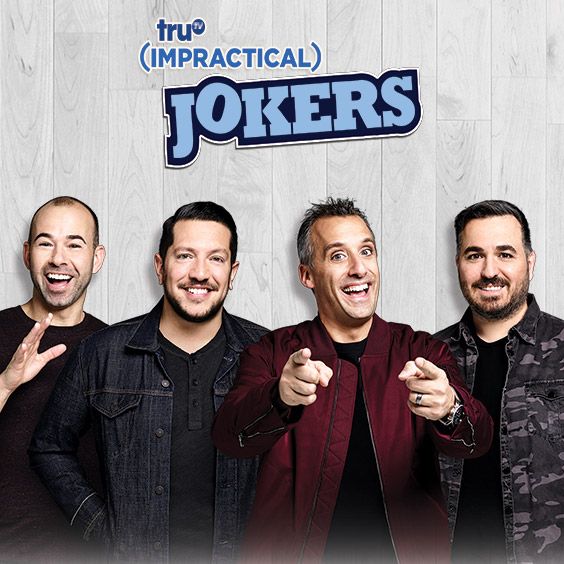 The Tenderloins is a New York-based comedy troupe, whose four members – Joe Gatto, James Murray, Brian Quinn and Sal Vulcano – are the creators, executive producers, and stars of truTV’s hit series, Impractical Jokers. Now in its eighth season, Impractical Jokers follows The Tenderloins as they compete to embarrass each other while being filmed by hidden cameras. With each new season, the show continues to take dares to outrageous levels with new over-the-top hijinks. In addition to the top-rated television show, the group wrapped their first feature film in 2019 and are also debuting a new TV show – TBS’s “The Misery Index” hosted by Jameela Jamil in Fall 2019. The Troupe has toured steadily over the last four years with its highly-successful, “Where’s Larry?”, “Santiago Sent Us,” & “Cranjis McBasketball” tours playing to hundreds of thousands of fans in the US and UK, including three sold-out nights at Radio City Music Hall, a sold-out Madison Square Garden, and five sold-out shows at London’s O2 Arena. Natives of Staten Island, NY, Vulcano, Gatto, Murray and Quinn met while attending high school and later formed The Tenderloins Comedy Troupe in 1999. After years of performing live improv and sketch comedy shows, The Tenderloins crossed over to the web, garnering millions of views for their internet sketches, eventually creating the runaway success Impractical Jokers for truTV. Impractical Jokers is top 5 in its time slot on cable in the US and is the #1 show on Comedy Central in the United Kingdom and India.

Joe Gatto
Joe Gatto is a man who knows no shame.  The most fearless of this mischievous mob, Joe has zero qualms about doing or saying anything the other guys tell him to do, whether it’s yelling at the top of his lungs or dropping his nose on unsuspecting strangers.  Loud, in-your-face and goofy, Joe never fails to make a scene or crack people up with his outrageous behavior.

Sal Vulcano
Here comes Mr. Sensitive!  Easily embarrassed and prone to extreme discomfort, Sal has got a list of peeves a mile long and the other guys love to watch him squirm.  Lucky for Sal, he’s always quick with a witty one liner that can defuse even the most awkward situation.  Just don’t touch his straw and don’t use his lip balm.  He hates that.

Brian “Q” Quinn
Like a bull in a china shop, Q doesn’t care what he tramples on to win the day.  Gruff and rough around the edges, Q doesn’t exactly endear himself to strangers, but beneath his abrasive manner beats a big sloppy heart.  Just don’t come at him without shaving your mustache, or prepare to suffer the consequences.

James “Murr” Murray
Don’t let his beguiling grin fool you; Murr is the evil mastermind of the crew.  Cool and calculating, Murr analyzes every challenge to find the easiest path to victory.  His moral compass seems to malfunction often, letting him do and say some of the most embarrassing and offensive things with ease.  If only his conscience didn’t pop up at the most inopportune moments to snatch defeat from the jaws of victory.

An Evening With Impractical Jokers