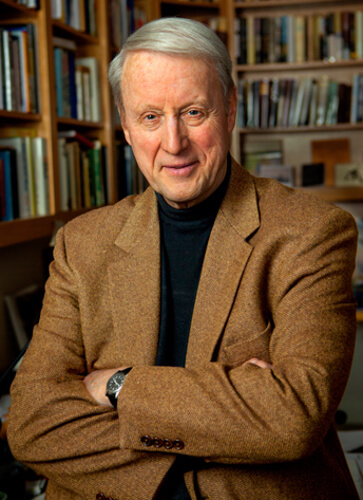 Hedrick Smith, Pulitzer Prize-winning former New York Times reporter and editor and Emmy award-winning producer/correspondent, has established himself over the past 50 years of his career as one of America’s most distinguished journalists. In 26 years with The New York Times, Mr. Smith covered Martin Luther King Jr and the civil rights struggle, the Vietnam…

Hedrick Smith, Pulitzer Prize-winning former New York Times reporter and editor and Emmy award-winning producer/correspondent, has established himself over the past 50 years of his career as one of America’s most distinguished journalists.

In 26 years with The New York Times, Mr. Smith covered Martin Luther King Jr and the civil rights struggle, the Vietnam War in Saigon, the Middle East conflict from Cairo, the Cold War from both Moscow and Washington, and six American presidents and their administrations. In 1971, as chief diplomatic correspondent, he was a member of the Pulitzer Prize-winning team that produced the Pentagon Papers series. In 1974, he won the Pulitzer Prize for International Reporting from Russia and Eastern Europe.

His book The Russians, based on his years as New York Times Moscow Bureau Chief from 1971-74, was a No. 1 American best-seller. It has been translated into 16 languages and has been widely used in university and college courses.  His next book, The Power Game: How Washington Works, was also a major best-seller. It became a bible for newly elected members of Congress and their staffs and was bedside reading for President Clinton. His newest book, Who Stole the American Dream? published by Random House in September 2012 , has been hailed by critics for brilliant analsysis of political and economic trends and changes in the U.S. over the past 30-40 years.

Mr. Smith’s documentary work has won many of televisions major awards. Two of his Frontline programs, The Wall Street Fix and Can You Afford to Retire?  won Emmies and two others, Critical Condition and Tax Me If You Can were nominated. Twice he has won or shared the Columbia-Dupont Gold Baton, or grand prize, for the year’s best public affairs program on U.S. television – for Inside Gorbachev’s USSR in 1990, and for Inside the Terror Network in 2002, an investigation of the Al Qaeda pilots who carried out the 9/11 attack and how the U.S. missed chances to stop them. Along with the George Polk, George Peabody and Sidney Hillman awards for reportorial excellence, his programs have won two national public service awards.

One distinctive feature of Hedrick Smith’s television productions is his focus not just on examining systemic problems in modern America but on seeking solutions, which was the title of his mini-series on teen violence and hate crime, used by the Justice Department and members of Congress. His PBS reports have probed the costs and causes of poor health care, failures in education, the collapse of traditional pensions and the flaws of 401k plans, and the modern burdens of working couples juggling work and family. He couples that analysis with vivd grass roots success stories, giving audiences concrete examples of how others have confronted and overcome obstacles.

Mr. Smith’s career began in print journalism in the 1950s, with summer jobs as a cub reporter for The Greenville (S.C.) News. After graduating from Williams College, doing graduate work as a Fulbright Scholar at Oxford University, and serving three years in the U.S. Air Force, Mr. Smith joined United Press International in Memphis, Nashville and Atlanta, 1959-62. He moved to The New York Times, 1962-88.  He was chosen for a prestigious Nieman Fellowship at Harvard in 1969-70.

Mr. Smith began creating documentaries for PBS in 1989 with an adaptation from his best-selling book, The Power Game. His second documentary series, Inside Gorbachev’s USSR, broadcast on PBS in 1990, built on his experience as Moscow Bureau Chief for The Times in the 1970s, on his best selling book, The Russians, and on his subsequent coverage of Mikhail Gorbachev’s perestroika.

As a documentarian, Mr. Smith has ranged widely. Before the 2000 election, PBS devoted an entire prime-time evening to his three-hour pre-election special on the quality of U.S. health care, Critical Condition With Hedrick Smith. He has produced two four-hour mini-series on the impact of the global economy on the American middle class, Challenge to America and Surviving the Bottom Line. For Black History month in 2000, he gave PBS viewers Duke Ellington’s Washington. A year later, he created Rediscovering Dave Brubeck, an intimate portrait of the legendary jazz pianist.

He subsequently led Frontline investigative reports – Bigger Than Enron, The Wall Street Fix, Tax Me If You Can, Is Wal-Mart Good for America?  Spying on the Home Front, and Can You Afford to Retire? These programs probed accounting scandals, conflicts on Wall Street, corporate fraud and tax evasion, the collapsing private pension system, and data mining and domestic eavesdropping by the NSA and FBI.

Making Schools Work, Mr. Smith’s two-hour special on education in October 2005, won a second national public service award from Sigma Delta Chi. In two previous series, Challenge to America in 1994 and Surviving the Bottom Line in 1998, Hedrick Smith Productions compared the performance of American schools with such other countries as Germany, Japan and China.

Over 25 years, PBS viewers saw Hedrick Smith as a principal panelist on Washington Week in Review and as a special correspondent for The NewsHour with Jim Lehrer. Mr. Smith has received seven honorary doctorate degrees. He is well known as an effective speaker to college commencements, civic groups, business conventions, and lecture series nationwide, admired for cogent analysis and compelling story-telling.
(August 2012)

A Conversation With Hedrick Smith
The cause of economic disparity in the United States, its effects, and what we can do to correct our course as a country. In the earlier half of the 20th century, workforce productivity and median hourly wages increased equally. In the 1970’s everything began to change as economic growth was channeled toward the 1%

Hedrick Smith – Straight Talk About America Today
Hedrick Smith is an experienced speaker who attracts attentive audiences and excellent reviews. Widely followed are his  May Day speech in Seattle (left), his TEDx Talk on “the Great Divide” (3rd down)  and his keynote speech at the 2013 Boulder World Affairs Conference was warmly received (bottom). In the past two years, he has appeared as a campus lecturer and master class leader at more than 50 college and university campuses from Harvard Kennedy School to UC Berkeley, as well as addressing such important civic groups as the Commonwealth Club of San Francisco, Seattle Town Hall, the Union League of Chicago, Leadership Alabama, Denver Forum, Boston University Library, and the Emerson Center in Vero Beach, Florida.

For his presentations, Mr. Smith draws on his wide-ranging New York Times and PBS documentary reporting to deliver penetrating analysis of public policy issues and to address contemporary issues of economic and politics reform, spiced with humor, anecdotes and personal vignettes. He is especially good at engaging students in dialogue and during question-and-answer sessions with larger audiences.

His new best-selling book, “Who Stole the American Dream?” provides a rich source of material for lectures on the major power shift that has transformed the landscape of power in Washington since the late 1970s; on the ”wedge economics” that have created glaring inequalities in the U.S. economy, leaving the middle class stuck in a rut; on the accidental beginnings of the 401 (k) system that is now heading nearly half of the Baby Boomer generation for poverty in retirement; on the “upside down mortgages” of the 2000 decade that moved $6 trillion in accumulated wealth form mostly middle class homeowners to Wall Street banks and wealthy investors over the past decade; on the million foreigners working in the U.S. pushing Americans out of high tech jobs.

As a reporter, Hedrick Smith talks to Americans high and low. Since the 1960s, he has covered six American presidents and their administrations. His wide-ranging contacts enable him to take audiences inside Wall Street and behind the scenes in the Washington power game, and also to capture ordinary Americans Main Street struggling with today’s tough economics and polarized politics – jet airline mechanics,small businessmen, real estate brokers, software managers, and many more.

Can we heal our great divide? 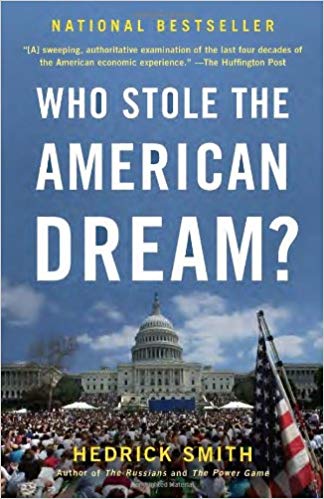 Who Stole the American Dream? 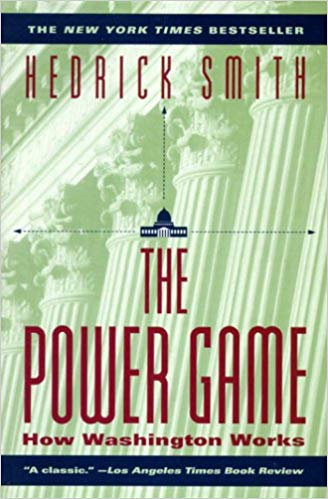 The Power Game: How Washington Works 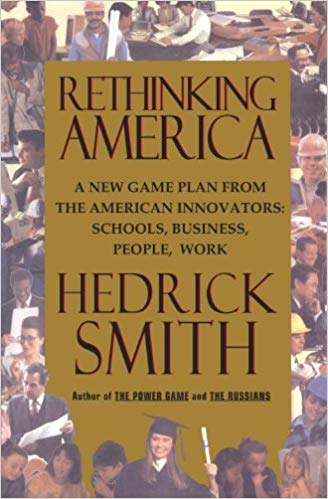 Rethinking America: A New Game Plan From The American Innovators