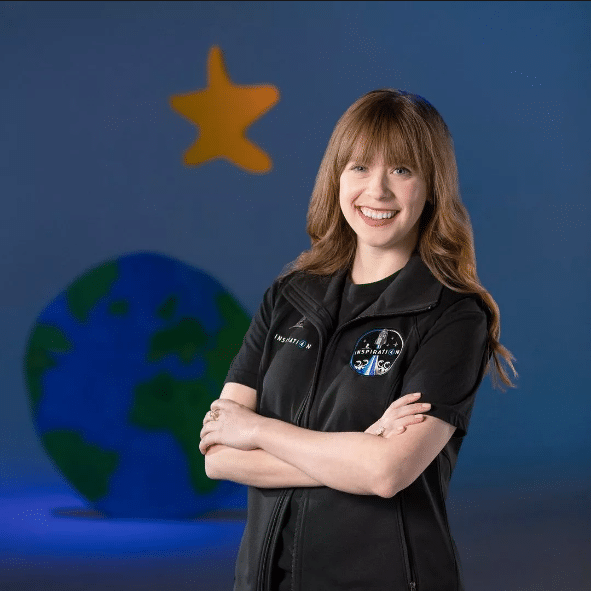 Hayley Arceneaux is a St. Jude Children’s Research Hospital employee, bone cancer survivor and private astronaut who is now a physician assistant; she will join billionaire Jared Isaacman on SpaceX’s first private spaceflight SpaceX Inspiration4 slated to launch no earlier than the fourth quarter of 2022.

Hayley Arceneaux is a St. Jude Children’s Research Hospital employee, bone cancer survivor and private astronaut who is now a physician assistant; she will join billionaire Jared Isaacman on SpaceX’s first private spaceflight SpaceX Inspiration4 slated to launch no earlier than the fourth quarter of 2022.

Arceneaux will occupy the mission seat representing the pillar of hope as the crew’s Chief Medical Officer. Arceneaux will become the youngest American in space, according to The Associated Press, edging out pioneering astronaut Sally Ride, who was 32 when she became the first American woman to launch in 1983. She will also be the first American with a prosthesis in space, having had surgery at age 10 to replace her knee and get a titanium rod in her left thigh bone, the AP reported.

“My battle with cancer really prepared me for space travel,” Arceneaux told the AP. “It made me tough, and then also I think it really taught me to expect the unexpected and go along for the ride.”

She was raised in St. Francisville, Louisiana. When she was 10, she had a cancerous tumor in her left leg. She underwent chemotherapy, surgery at St. Jude to replace her knee and get a titanium rod in her left thigh bone, and physical therapy. The experience inspired her to want to work with other cancer patients at St. Jude when she grew up.

The mission crew will undergo comprehensive training, stress testing and mission simulations provided by SpaceX, the company said. They are set to launch from NASA’s Kennedy Space Center in Florida and orbit Earth every 90 minutes along a customized flight path during their multi-day journey before re-entering Earth’s atmosphere for a soft water landing off the Florida coast.

A Conversation with Hayley Arceneaux