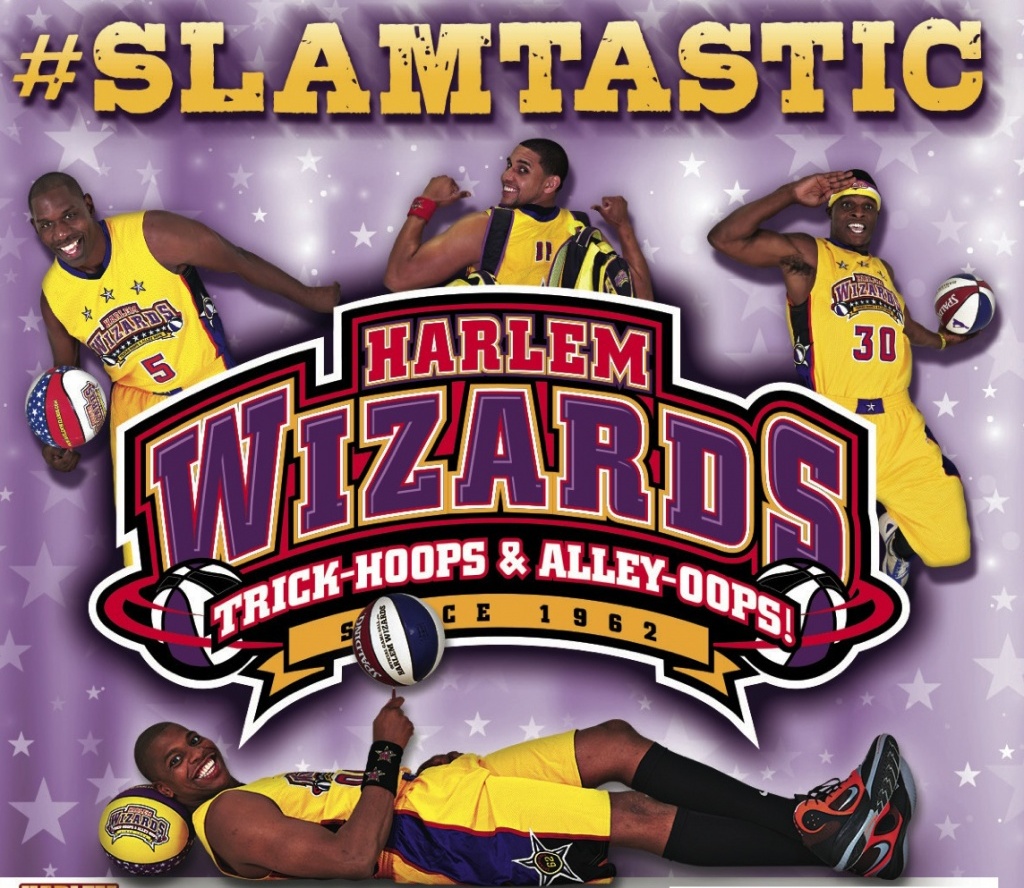 Wizards basketball team can pump up your school, organization, or charity fundraising while providing an enthusiastic community building event

The Harlem Wizards show brings oohs, aahs and serious laughter inspired by sky-high slams, hilarious humor, dynamic energy, fan participation, world class tricks and basketball wizardry. The aerodynamic athleticism coupled with comedy and community at a Wizards event will bring fans to their feet and smiles to their faces. The artistry of the Wizards is…

The Harlem Wizards show brings oohs, aahs and serious laughter inspired by sky-high slams, hilarious humor, dynamic energy, fan participation, world class tricks and basketball wizardry. The aerodynamic athleticism coupled with comedy and community at a Wizards event will bring fans to their feet and smiles to their faces.

The artistry of the Wizards is evident as they elevate the star-status of the home team featuring teachers, principals and local notables. Never in the history of sport will the losing team have so much fun.

Started in 1962 by New York Sports promoter Howie Davis, and now celebrating 53 years of Wizardry, he envisioned a show and organization that would put a different spin on show basketball. The Wizards are an institution, creating awe-inspiring fundraiser events for schools and nonprofits, last season alone playing in over 400 communities across the US, while raising over $2 million for schools, charities and nonprofits.

“Tojo” Henderson will be in the spotlight during the Harlem Wizard’s 2014-2015 Tour. It is his 50th year of entertainment basketball Wizardry. He will be sharing his gratitude and love for the fans in this, his final season on the road with the Wizards. Tojo has played in over 5000 show basketball games throughout the USA, Canada and South America. He is beloved as the gentle giant, with the booming baritone voice. Tojo has inspired the next generation of Wizards teammates with his dedication to entertaining families across the globe.

The Wizards roster is chock full of amazing and must see talent. The Wizards have three units Â that criss-cross the USA, with. Eric “Broadway” Jones, and Dwayne “Swoop” Simpson, both former Globetrotter showmen, as well as budding showmen, Rashaan “The Rocket” Barner and David “DP” Paul, currently lead the shows along with Tojo and are bringing a fresh innovation and spirit to the Wizards constantly evolving awe-inspiring show.

The dribbling, fancy moves and tricks are led by Arnold “A-Train” Bernard, an accomplished trickster, a veteran of 7 years with the Globetrotters, and a featured performer in the famous NIKE Freestyle commercial. “King Arthur” Lewis brings it with his dribbling and electric enthusiasm. Arthur was an Academic All-American at Bowie State University. Add in James “The Roadrunner” Tyndal who is fast enough to dribble thru New York City traffic, and Devon “Livewire” Curry who led his team to become the FIBA 3 on 3 US champion last year.

The Harlem Wizards have performed globally from famous arenas like Madison Square Garden to schools such as Madison High School. Their travels have taken them from Brussels to Beijing, from Italy to Istanbul and from Copenhagen to Copiague.

The Harlem Wizards create awe-inspiring and fun-filled basketball experiences, in a variety of settings and event types, from gyms and arenas, to theatres and blacktops, to even parades.

Please check through this section to find out the range of offerings.

Harlem Wizards Pair off Against Klinger Staff to Raise Funds for the PTO.