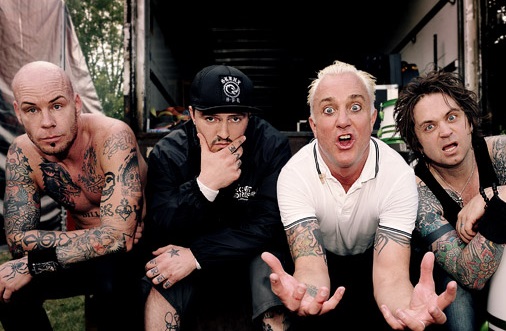 Pop/Punk/Ska Punk Band That Formed In 1994

Goldfinger formed with it’s original line-up in 1994. John and Simon worked together at NaNa’s shoe store in California. They decided to form a band and needed a drummer, so they asked Darrin who was working at the local Starbucks to listen to a tape they had made. The day he heard it he was…

Goldfinger formed with it’s original line-up in 1994. John and Simon worked together at NaNa’s shoe store in California. They decided to form a band and needed a drummer, so they asked Darrin who was working at the local Starbucks to listen to a tape they had made. The day he heard it he was air drumming along with it all day, he loved it! At this time, Goldfinger’s original guitarist left to the band to become a pro surfer in Costa Rica, where he still lives. John had a good friend named Charlie who played guitar and he thought he would be a great replacement on guitar.

Charlie’s first show with Goldfinger was a little hectic, he was given a tape of the songs on Friday night, practiced with the band on Saturday and played a show that night. Goldfinger were now recording their Demo EP called “richter”, it was given amazing reviews and they were getting good indie/college radio airplay. Goldfinger were now given the oppurtunity to record the S/T debut LP. They recorded the cd in 1995 and it was released in spring on 1996, their first single/video “Here in your Bedroom” was played at a high rate and they gained in popularity. Goldfinger also released videos for “Mable” and “Only a Day”.

In 1996 Goldfinger played more shows than there are days…they toured with such bands as the Sex Pistols, No Doubt, Vans Warped Tour, and Reel Big Fish. In 1997 Goldfinger released their second LP entitled “Hang-Up’s” their first single “This Lonely Place” was not as big a success as the release of “Here in your Bedroom”, but it did give them numerous live talk show apperances and spins of the video, which is a play on “Alien”. Goldfinger also released a video for the single “More Today than Yesterday” a cover of the Spiral Staircase song. Which can be found on the “Waterboy” soundtrack.

In the summer of 1998, Simon left the band due to musical differences. He was replaced by John’s old band mate from the Electric Love Hogs. And more recently the bassist for 22jacks a band that opened for Goldfinger on many tours. Goldfinger Released their second EP in the Fall on ’99 Called. “Darrin’s Coconut Ass-Live From Omaha” The EP contains 8 songs which are all covers. In the Spring on 2000 Goldfinger released their 3rd LP called “Stomping Ground” the single in North America was “Counting the Days” while Europe was invaded with “99 Red Balloons”. The band has been touring since the release of Stomping Ground with such bands as: Eve6, Showoff, BloodHound Gang, and Mest.

In 2002 Charlie left the band and was replaced by Brian Arthur, formerly of Unloco. Brian joined the band just before the released of their 2003 cd called “Open Your Eyes” which was released on Jive/Zoomba. The band toured in support with large acts like Sum41 and Good Charlotte. The band toured on and off until 2005 when they released “Disconnection Notice” on Maverick Records and toured Europe, Australia, and North America in support. In mid-2005 the band released Brian Arthur of duties on guitar and replaced him with ex-guitarist Charlie Paulson. Since Charlies’ return the band has been playing a handful of shows and done a few small tours. In 2007 Goldfinger finished the recording of their next cd which was released in 2008 on Sideone Dummy called “Hello Destiny”. To promote the album, the band embarked on a successful North American tour with Less Than Jake in summer of 2008. They also played in the UK at the Reading and Leeds Festivals on 22–23 August 2008.

Recently, frontman John Feldmann has produced records for Mest, The Used (whose vocalist Bert McCracken sang some guest vocals on “Open Your Eyes”, “Woodchuck”, “Ocean Size”, and “Handjobs for Jesus”), Hilary Duff and Story of the Year. He also produced Good Charlotte’s single “The Anthem” (whose guitarist Benji Madden provides guest vocals on “January”.. “99 Red Balloons” is featured in Not Another Teen Movie, Eurotrip, the video game Gran Turismo 3: A-Spec, and along with their cover of The Spiral Starecase’s “More Today Than Yesterday”, during the ending credits of The Waterboy . “Superman” is featured in the comedy Kingpin. “Walking in the Dark” is featured in the movie Dead Man on Campus.

The band’s video game debut was in Tony Hawk’s Pro Skater with the song “Superman”. Goldfinger’s song “I Want” from Disconnection Notice is featured in Burnout Revenge on the PlayStation 2, Xbox, and Xbox 360, and is also featured in Burnout Legends on the PlayStation Portable.”My Everything” is featured on SSX On Tour also by Electronic Arts. The single, “Spokesman”, is featured on Activision’s Tony Hawk’s Pro Skater 4. Goldfinger also appeared in the Reel Big Fish video “Sell Out” for a couple of seconds.

An Evening With Goldfinger