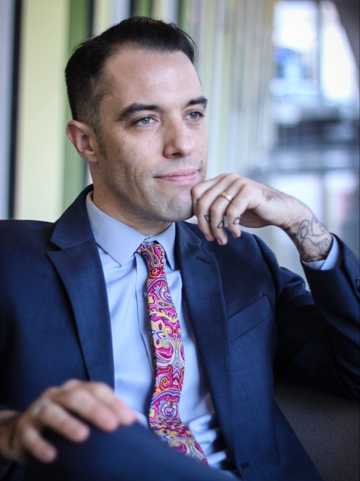 Attorney and Nationally Recognized Poet and Spoken Word Artist. His work has been featured on HBO, All Def Poetry, TEDx, and Upworty

Before transitioning to a career in law, Geoff Trenchard was a nationally recognized poet and spoken word artist. His work has been featured on HBO, All Def Poetry, TEDx, and Upworty. He collaborated with illustrator Ryan Larson to create Joker Year One, an illustrated backstory of Heath Ledger’s character in The Dark Knight. He has…

Before transitioning to a career in law, Geoff Trenchard was a nationally recognized poet and spoken word artist. His work has been featured on HBO, All Def Poetry, TEDx, and Upworty. He collaborated with illustrator Ryan Larson to create Joker Year One, an illustrated backstory of Heath Ledger’s character in The Dark Knight. He has received commissions for theatrical work from the National Performance Network, Dance Theater Workshop, The Zellerbach Family Foundation, and the City of Oakland.

Geoff holds a Bachelor of Arts from the New School, graduating with honors and a double major in Creative Writing and Psychology. He completed two theses- an examination of the pathologies of Male on Male Sexual Assaults in prisons and a discussion of developmental psychology as it applies to sex abuse in the Catholic Church. He was awarded a fellowship with the Riggio Writing and Democracy Program.

Geoff received a Juris Doctorate from Hofstra in 2014. He focused his legal scholarship on the intersection of family, criminal, and immigration law. He was awarded the Charles H. Revson Law Student Public Interest Fellowship, the Bergstrom Child Welfare Law Fellowship, and is a recipient of awards from both the Equal Justice Works and the Public Justice Foundation. He’s written research papers on Parental Alienation Syndrome in domestic violence cases, a nationwide survey of youth offender laws, the effects of overburdened child welfare workers, and sentencing standards for young people convicted of sexual assault after Graham v. Florida.

He was awarded a Postgraduate Fellowship to serve indigent LGBT asylum seekers with Immigration Equality and help train students in the Hofstra Asylum Clinic. He was admitted to the New York Bar in 2015.

An Evening With Geoff Trenchard