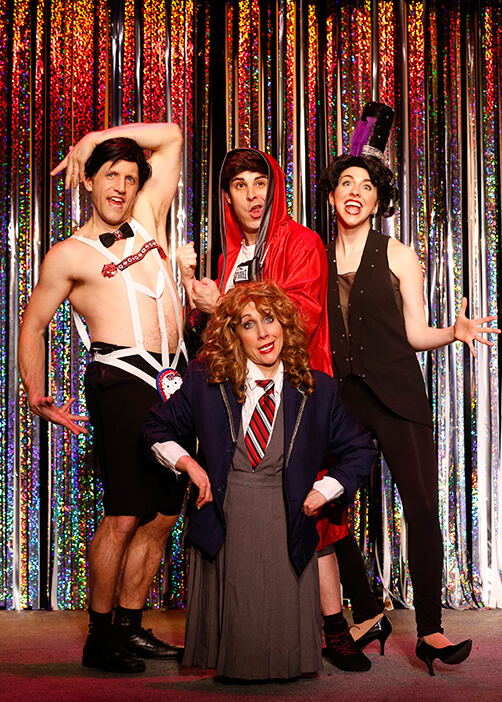 Forbidden Broadway: Alive & Kicking!, the fall-down funny roast of Broadway that has picked up nine Drama Desk Awards, a special Tony Award, an Obie, a Lucille Lortel and Drama League Award, is back at last, and not a moment too soon! This New York sensation returns with an all-new, fresh view of the highs…

Forbidden Broadway: Alive & Kicking!, the fall-down funny roast of Broadway that has picked up nine Drama Desk Awards, a special Tony Award, an Obie, a Lucille Lortel and Drama League Award, is back at last, and not a moment too soon! This New York sensation returns with an all-new, fresh view of the highs and lows of recent Broadway shows. It features outrageous costumes, hilarious rewrites of the songs you know and dead-on impressions by a stellar cast!

Bring a bit of New York City to your community with a Forbidden Broadway performance.

Forbidden Broadway has been a vital part of New York theater since 1982 when its creator, Gerard Alessandrini, put together an act to show off the talents of some friends and himself. He thought it would be great fun to lampoon the Broadway stars of the day, and Forbidden Broadway was born. Hailed for its hilarious writing and hot young cast, critics and audiences were wowed and Forbidden Broadway has since become New York’s longest running musical comedy revue. Forbidden Broadway has won countless awards, including Obie, Outer Critics Circle, and the 2001 Drama Desk award for best musical revue. Many of its victims (stars and casts) make a point of stopping by to see what Alessandrini has done to them. Recent visitors include Whoopi Goldberg, Rosie O’Donnell, Alec Baldwin, Bea Arthur, Stockard Channing, Gene Hackman and Mary Tyler-Moore.

An Evening With Forbidden Broadway