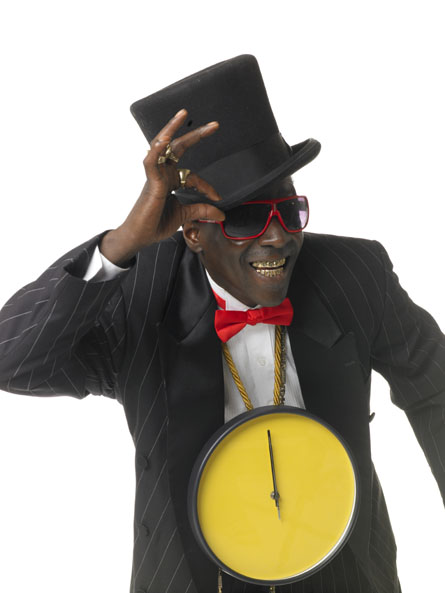 Flavor Flav is an hip-hop artist known for his work with Public Enemy, a hip-hop group that also included Chuck D, Norman Rogers (Terminator X) and Richard Griffin (Professor Griff). He is also recognized for his work on several reality television series, including “The Surreal Life,” “Strange Love” and “Flavor of Love,” airing on VH1.…

Flavor Flav is an hip-hop artist known for his work with Public Enemy, a hip-hop group that also included Chuck D, Norman Rogers (Terminator X) and Richard Griffin (Professor Griff). He is also recognized for his work on several reality television series, including “The Surreal Life,” “Strange Love” and “Flavor of Love,” airing on VH1.

At an early age, Flav demonstrated he was an intelligent but troubled child. Music came easy to him, and Flav taught himself how to play piano, drums and guitar. He also sang in the youth choir at his church.

His life seemed to bounce back when he met Carlton Ridenhour (who later became known as Chuck D). The two quickly bonded over music. Flav, who soon adopted his new moniker in honor of his graffiti tag, joined his friend on Chuck’s hip-hop radio show at Adelphi University, where Chuck studied graphic design.

Their early demo found its way to the offices of a new label, Def Jam Records, and its founder, producer Rick Rubin. Rubin liked what he heard, and in 1986 Public Enemy inked a deal with him.

Public Enemy was political and antagonizing, and for five years, beginning in 1987, it ruled the hip-hop world with albums like Yo! Bum Rush the Show and It Takes a Nation of Millions to Hold Us Back.

Flav played an important role in the group’s success. Next to Chuck’s forceful personality, Flav’s onstage persona maintained a certain playfulness. He anchored his look with a giant clock that he wore around his neck, and turned up the volume in concert by spouting phrases like “Yeah, boyee!” into his microphone.

In 2003, a humbled and still recovering Flav relocated to the West Coast and began seeking out television work. In 2004, he landed in the cast of the reality television series The Surreal Life, which, in part, documented his relationship with Brigitte Nielsen.

Viewer interest in the couple was so strong that it eventually inspired the creation of a brand-new series, “Strange Love.” When the couple split in 2006, Flav launched a new reality show, “Flavor of Love,” which ran for three seasons. That same year he released his first solo album, Flavor Flav, also known as Hollywood.

A Conversation With Flavor Flav