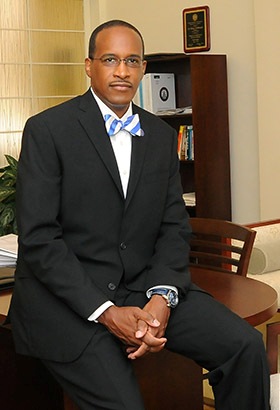 A native of Atlanta, Dr. Kimbrough was his high school salutatorian and student body president in 1985, and went on to earn degrees from the University of Georgia, Miami University in Ohio, and Georgia State University.

Dr. Kimbrough has forged a national reputation as an expert on fraternities and sororities, with specific expertise regarding historically Black, Latin and Asian groups. He is the author of the book, Black Greek 101: The Culture, Customs and Challenges of Black Fraternities and Sororities.

He was named the 1994 New Professional of the Year for the Association of Fraternity Advisors. Other honors include the 2010 Ebony Magazine Power 100 list, the 2013 NBC News/The Griot.com’s 100 African Americans making history today, and the 2014 HBCU Digest male President of the Year.

Dr. Kimbrough and his wife Adria Nobles Kimbrough, attorney and director of the Dillard University pre-law program, are the proud parents of two children: Lydia Nicole, 10, and Benjamin Barack, 7.

Where Do We Go from Here? Chaos or Community

When Debate Dies Who Loses

Thank you again for a great presentation, our attendees are still talking about it!