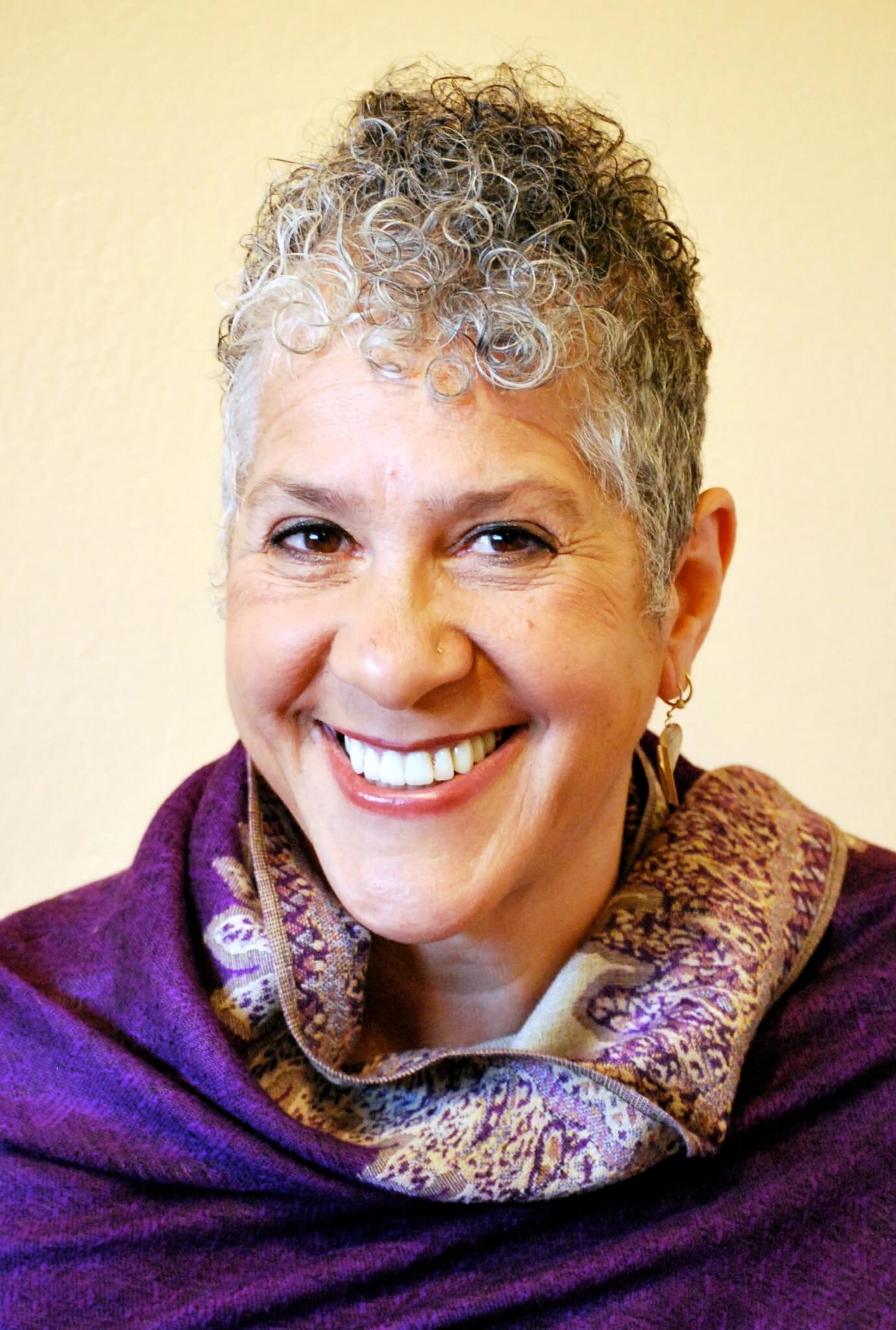 Filmmaker and Founder and Creative Director of World Trust, Is a Dynamic Educator In The Field of Diversity and Racial Equity

Shakti Butler, PhD, filmmaker and Founder and Creative Director of World Trust, is a dynamic educator in the field of racial equity.  She engages her audience with participatory keynotes and seminars, often using clips from her groundbreaking documentaries. Dr. Butler is a multiracial African American woman (African, Arawak Indian, and Russian-Jewish) whose work as a…

Shakti Butler, PhD, filmmaker and Founder and Creative Director of World Trust, is a dynamic educator in the field of racial equity.  She engages her audience with participatory keynotes and seminars, often using clips from her groundbreaking documentaries.

Dr. Butler is a multiracial African American woman (African, Arawak Indian, and Russian-Jewish) whose work as a creative and visionary bridge builder has challenged and inspired learning for over two decades and has served as a catalyst for change.

Butler is the producer and director of the acclaimed documentaries, “The Way Home,” “Light in the Shadows,”and “Mirrors of Privilege: Making Whiteness Visible.” Her newest film, “Cracking the Codes: The System of Racial Inequity” uses interviews, story, theater and music to illuminate the larger frame of structural and systemic racial inequity. Featuring some two dozen racial justice leaders from across the country, the film examines the causes and consequences of systemic inequity in the United States.

Dr. Butler is an inspirational facilitator, trainer and lecturer. Her work emerges from years of self-exploration and her commitment to social justice. Dr. Butler’s services are sought after by schools, universities, public and private organizations, and faith-based institutions.

Dr. Butler invites her audience to grapple with both the intellectual and emotional complexities of race. She conveys the interconnection between internal and external/structural components of racial inequity, and reveals how self-perpetuating systems reinforce disparities in institutions. This framing, along with the use of Butler’s films, set the context for constructive conversation. Dr. Butler inspires a collective will and develops deeper, cohesive understanding that can be directly applied to analysis and action.

A warm and compassionate person, Butler uses her ability to listen deeply while asking critical questions that support self-directed learning in others. Her speaking and teaching styles enrich people’s abilities to move toward expanded capacities for building community, an important first step in effecting change.Group dialogue, self-inquiry, reflection and whole body learning by participants are some of the strategies she employs.

Shakti Butler offers diversity and inclusion workshops, events and presentations that are tailored to address your goals. Engaging participants with each other is a hallmark of her methodology. All formats, even her film screenings, are highly interactive. Supporting groups to grapple with both the intellectual and emotional aspects of inequity makes these events transformational. All seminars use World Trust documentary films or Racial Equity Learning Modules as the basis for learning and dialogue about privilege and oppression. Presentation length and content is flexible, here are some sample formats:

Cracking the Codes: The System of Racial Inequity | ?Film Screening and Dialogue Event? | 2.5 hours
This event is designed as a catalyst for transformative learning about systemic inequity. We use music or other modalities to build community among audience members, introduce a simple frame for understanding the system of inequity, then braid segments of the film Cracking the Codes: The System of Racial Inequity with facilitated audience dialogue. This event is both challenging and uplifting, and is suitable for racial equity advocates as well as those who are new to the topic. Adopted for use by over 600 institutions, Cracking the Codes asks that we understand and talk about the causes and consequences of systemic inequity. YES! Magazine calls Cracking the Codes “the most dignified and evidenced response possible to the blithe assertion that we now live in a “post-racial” America.” The film illuminates a system that perpetuates structural inequity using moving personal accounts from 23 leaders in the equity movement including: Amer Ahmed, Joy DeGruy, Ise Lyfe, Peggy McIntosh, Hugh Vasquez and Tim Wise. “Cracking the Codes is designed to address and deepen the national conversation on race in this country,“ says Shakti Butler, PhD, director of the film and founder of World Trust Educational Services. “The current conversation is not only shallow, but actually harmful. We continue to primarily focus only on individuals, when institutional and structural inequities are pressing. We live in a time when we cannot afford to squander our national treasure — the minds and hearts of all people.”

A Bold Dream: Creating a World That Works for Everyone? | Workshop | 3 hours – 1 day
This workshop supports participants to reframe and deepen the national conversation on race. Through multi-media, dialogue, case studies and other participatory methods, the facilitator guides participants to seek new questions that foster collective engagement and build leadership skills that can illuminate pathways towards healing, equity and a more sustainable future. A multicultural future requires that we move towards collective impact that is imbued with understanding, equity and wisdom. To that end, participants will gain a practical framework for understanding and deconstructing systemic racial inequities, creating positive dialogue and building skills that enable dialogue to continue after the workshop.

A Deeper Understanding of the System: History, Race, Power and Economics | Workshop | ?2.0 – 4.0 hours
Internal biases and external structures inform a system that continues to churn out racial disparities in the United States. This session speaks to the role of history, power and economics in inequity and provides an analytical road map to current day structural inequities. In order to envision, create and embrace a future that moves towards equity — a world in which everyone can thrive– we must challenge ourselves individually and collectively. Through the use of film and dialogue, participants will reflect, inquire and engage with one another. Delving into the system in this participatory way can help support participants to speak more fully to the challenges that impact both the marginalized and mainstream.

Irresistible Justice: Cultivating Joy as an Act for Social Change? | 2.0 – 4.0 hours
This session uses clips from Cracking the Codes: The System of Racial Inequity as a catalyst for transformative learning, and fosters a deeper understanding of the parts we all play in perpetuating the systemic dance of racialization. A holistic framework that conveys the interconnection between internal/personal and external/structural components of racial inequity frames the analysis and dialogue in this session. In order to manifest human rights and dignity for all, it is necessary that we seek union between the head and heart. It is the head that can recognize, analyze and strategize to overcome disparities. It is the heart that obliterates fear. We will use dialogue as a unique tool to create union between the head and heart. It is through this union that we can infuse our actions with our deepest held values, the key to avoiding burn-out and sustaining joy in our work.  Joy, rather than fear, in conjunction with systemic framing becomes a radical act towards promoting justice.

Strategic Questioning Module | ?1.0-2.0 hours
Strategic Questioning helps our clients collaborate on solutions long after the workshop is over. This technique, developed by Ronald T. Hyman and later refined by Fran Peavey, allows the questioner and questionee to engage in active dialogue that leads to solutions rather prompting a series of limited or dead-end responses. The purpose of the questions is two-fold: It allows the questionee to consider options and make decisions without feeling pressured, and it lets both questioner and questionee take an active role in finding solutions.

I was impressed with Dr. Butler’s ability and willingness to integrate an appeal to the spirit with an explanation of systemic oppression, to consider the whole person and to address issues from that perspective. The clips from Cracking the Codes were able to bring people into a situation very effectively, to inspire empathy and break down the distance between audience and subject in a way that bridges intellect and heart.

Dr. Butler’s leadership in conceptualizing the issues of racism at the institutional and individual level is revealed not only in her films, but also in her personal work as a well-recognized and well-respected facilitator and public speaker on these topics. The audience participants raved about both the content and the conditions that Ms. Butler created for the exploration and analysis of these often-taboo topics.

Dr. Butler’s keynote was fun, energetic, thought provoking and easily accessible. She has the ability to engage everyone in the audience. They were excited, crying, thinking/processing and still talking long after the keynote was over. It was what we needed at the conference — a balanced diet of intelligence, community, youthful energy, love and action.