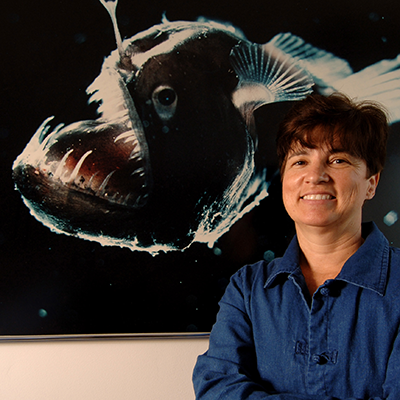 Dr. Edith Widder is an expert in oceanographic research and a leader in designing and inventing new submersible equipment to enable unobtrusive deep-sea observations. Widder is co-founder of the Ocean Research & Conservation Association (ORCA), a nonprofit organization dedicated to the protection and restoration of marine ecosystems and involved in helping with the Gulf Oil…

Dr. Edith Widder is an expert in oceanographic research and a leader in designing and inventing new submersible equipment to enable unobtrusive deep-sea observations. Widder is co-founder of the Ocean Research & Conservation Association (ORCA), a nonprofit organization dedicated to the protection and restoration of marine ecosystems and involved in helping with the Gulf Oil Spill. She combines her expertise in research and technological innovation with a commitment to reversing the worldwide trend of degradation in our marine environment.

Two years after completing her Ph.D., Dr. Widder became certified as a Scientific Research Pilot for Atmospheric Diving Systems. Edie holds certifications that qualify her to dive the deep diving suit WASP, as well as the single-person untethered submersibles DEEP ROVER and DEEP WORKER and she has made over 250 dives in the JOHNSON-SEA-LINK submersibles. Her research involving submersibles has been featured in BBC, PBS, Discovery Channel and National Geographic television
productions.

A specialist in bioluminescence (the light chemically produced by many ocean organisms), Dr. Widder has been a leader in helping to design and invent new submersible instrumentation, and equipment to enable unobtrusive deep-sea observations. Working with engineers, she has conceived of and built several unique devices that enable humans to see beneath the waves in new ways, including HIDEX, a bathyphotometer which is the U.S. Navy standard for measuring bioluminescence in the ocean; important information for keeping submarines hidden from above.

Edie also built LoLAR, an ultrasensitive deep-sea light meter that measures light in the deep ocean, both dim down-welling sunlight and bioluminescence – both important determinants of animal distribution patterns. Most recently, Widder created a remotely operated deep-sea camera system, known as ORCA’s Eye-in-the-Sea (EITS), which, when deployed on the sea floor, automatically detects and measures the bioluminescence of nearby organisms.

Edie has produced footage of rare sharks, jellyfish, and discovered a new species of large squid (over six feet in length), all in their natural habitats. Edie and her unobtrusive camera system were recently featured on the Discovery Channel series Midwater Mysteries and PBS’s NOVA ScienceNOW.

In 2005, Dr. Widder resigned from her 16 year post at Harbor Branch Oceanographic Institution to cofound the Ocean Research & Conservation Association (ORCA), a non-profit organization dedicated to the protection and restoration of marine ecosystems and the species they sustain through development of innovative technologies and science-based conservation action.

While translating complex scientific issues into technological solutions, Dr. Widder is fostering greater understanding of ocean life as a means to better, more informed stewardship. In September of 2006, based on her work with ORCA, Edie was awarded a prestigious MacArthur Fellowship from the John D. and Catherine T. MacArthur Foundation.

A Conversation With Dr. Edith Widder
Dr. Edith Widder, biologist and deep-sea explorer, will present on the topic, “Exploring and Protecting Planet Ocean.

How We Found the Giant Squid

Glowing Life In An Underwater World

Let There Be Light: Exploring and Mapping the Ocean with Bioluminescence

How We Found the Giant Squid